AN Abbeyleix teenager is the youngest competitor to have made it through to the national final of ActionAid’s speech writing competition.

Orlaith Condren (15), a third-year student at Heywood Community School in Ballinakill stood out from over 150 entries and will be one of ten selected to deliver their speeches at the final in Dublin’s Royal Irish Academy on Wednesday 20 March.

The increasingly popular competition, now in its fifth year, received the highest number of entries to date from students aged 14 to 17 from almost 50 schools across the country.

“She’s the youngest to have got this far, going up against fourth, fifth and sixth years,” he pointed out.

“To have qualified (for the final) from third year is a huge achievement,” he added.

“Some things you can coach them for, but something like this, you need a natural talent for,” said Mr Malone, who also wanted to mention Orlaith’s English teacher Sinead Clifford for helping her this far. 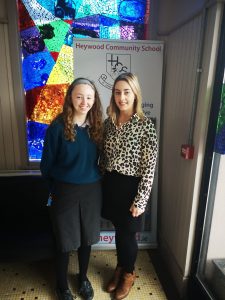 Orlaith’s meaty topic – ‘Men and boys need to play a larger part in tackling gender inequality for women’ – played no small part in her being shortlisted, as it is right up ActionAid’s street of pursuit.

“Gender inequality is a fundamental barrier to achieving sustainable development and improving the lives of young people around the world,” said Siobhán McGee.

“Every ten minutes, somewhere in the world, an adolescent girl dies as a result of violence,” she sombrely pointed out.

ActionAid provides long-term support to the poorest and most marginalised women and children in developing countries, so they can overcome the obstacles holding them back through the work of their women’s rights programme, funded by Irish Aid.

The programme has been very successful to date. For example: in communities in Kenya, female genital mutilation among girls has decreased by almost a third.

ActionAid has created this competition as a platform for young people to offer their contribution to achieving gender equality and the finalists will have the task of delivering their speech based on one of three topics relating to women’s rights to a panel of esteemed judges.

The two winning students will travel with their teachers to Greece this summer, where they will have the unique opportunity to see ActionAid’s work first hand, focusing on economic empowerment of women refugees and migrants.