Another Emmy for Seamus!

HE’S only gone and done it again! Animator Seamus Malone from Barrrowhouse has won an Emmy for his work on the BBC/Netflix animated series Watership Down.

The announcement was made at a gala awards ceremony in the Pasadena Civic Auditorium on Sunday night, 5 May.

A multi-award-winning writer, director and animator, the 45-year-old already holds an Emmy for his direction of children’s favourite Shaun the Sheep, which he won in 2010.

Seamus, who is a son of Jim and Mary Malone from Barrowhouse, along with his co-director Alan Short, had been nominated for ‘Outstanding Directing for an Animated Programme’ in the international Daytime Emmy Awards, the USA’s highest accolade for excellence in television production. 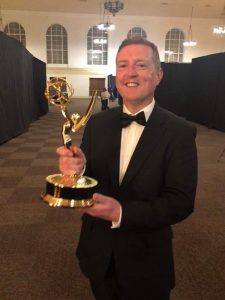 Seamus Malone with the Emmy award he won on Sunday night

Speaking to the Laois Nationalist from Los Angeles following his win, Seamus said: “It means a lot to be nominated by peers in the industry, so I was delighted to get a co-director Emmy nomination myself. I was happy enough with that, but then winning the ‘Outstanding Special Class Animated’ show for Watership Down was a big surprise on the night.

“I’ve had so many messages of congratulations from Barrowhouse and Athy since then and that means a lot to me, too.

“From the very beginning I knew it was going to be a tough adaptation to make within time and budget. It’s an epic three hours and 20 minutes long, so I’m quite proud of this win. It feels great to be able to share it with the rest of the crew because animation is such a lengthy collaborative process and there’s a lot of behind-the-scenes work that went on in Dublin, London and Mumbai to get this show made.

Explaining the work that goes into making an Emmy-winning film, Seamus, said: “I was directing it from all of these places and different time zones over 18 months and some days were very tricky, so it feels amazing to come out at the end of it with the Emmy.

“We popped a few champagne corks ourselves when we got off stage with the trophy. The executive producers were jumping up and down with joy! It was a great feeling; we all could celebrate.

Seamus is famous for his animation work on such big hits as Chicken Run, Wallace and Grommit and Shaun the Sheep.

A past pupil of Athy Community College, he studied animation at Ballyfermot College in Dublin and was quickly snapped up by top animation company Aardman, which has won more than 400 international awards, including four Oscars. He soon became key animator with the company and his CV includes a range of renowned films and series, including Shrek 2, Arthur Christmas and Were-Rabbit.