THE people of Laois can rest assured that they have the best fire and rescue service in the country.

These sentiments were expressed by chief executive John Mulholland in county hall last week, when 12 firefighters from stations around the county were formally recognised for their wins at the recent all-Ireland Fire and Rescue competition in Sligo. 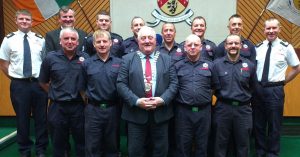 Under incident commander James Brown and the management of senior assistant chief fire officers Anthony Tynan and Shea Brennan alongside assistant chief fire officer Pauric Keeley, the Laois crew retained the title for best overall road traffic collision team as well as having the best incident commander and the best fire and rescue medics in Ireland.

In congratulation their efforts, cathaoirleach of the council and former fire officer John King proposed that the council fund the Laois team at the five-day world finals in France this September, which was seconded by cllr Willie Aird.

All of the councillors were effusive in their praise for the winning team.