Midsummer banquet at Ballykilcavan will tickle your tastebuds

LAOIS food and beverage producers will take centre stage at a Midsummer’s Day table banquet in Ballykilcavan just outside Stradbally.

Details of the event have just been announced, which incorporates a special long-table banquet collaboration between the newly-opened craft brewery and chef Martin Hayes of Bloom Restaurant in Portlaoise.

The Midsummer Day’s Banquet takes place on Friday 21 June with a reception at 7pm and a sit-down meal beginning at 8pm.

Chef Hayes has designed a menu to showcase the very best of locally  sourced and produced artisan and organic food and drink. 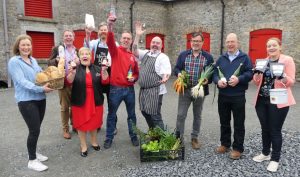 Some of Laois producers of artisan and organic food and drink that will be used in te four course Midsummer banquet.
Photo: Julie Anne Miller (NRF)

He said: “Laois has a wealth of great food producers. We really want to show off their produce to as wide an audience as possible.”
The menu will feature bread from Mueller & O’Connell Bakery in Abbeyleix, organic pork from Castlewood Organic Farm in Durrow, Irish Piedmontese beef from Michael Fennelly in Stradbally, organic oats from The Merry Mill in Vicarstown, pickles from G’s Gourmet Jams in Abbeyleix, vegatables from local grower John Egan in Ratheniska, salad leaves from Edmundburry Greens, Durrow, gin from Brennan’s Old House Gin in Ballinakill and beers from the brewer of Ballykilcavan Beers David Walsh-Kemmis, in whose 230-year-old stone courtyard the event will be staged.

He said: “We’re delighted to be hosting the event here at Ballykilcavan. We’re restoring the 18th century farmyard and it’s a great setting for an event like this. Martin produces wonderful slow-cooked food and I’m really excited to see the menu and looking forward to the event.”
Tickets for the four-course banquet are priced at €71.50 each. They are available online at the Dunamaise Arts Centre or on its website.

Laois has one new Covid-19 case