THE first-ever awards for the best environmental farmers in Laois were presented at a special ceremony in County Hall last week.

The winners of the 2019 Laois Co Council cathaoirleach’s award for good environmental practice on the farm were Pat and Ronan Kavanagh from Kilbricken. The runners-up were Joe and Mickey Hyland from Aghaboe, Abbeyleix.

The winner received €1,500 in prize funding and a trophy, while the runner-up received €500.

The awards were proposed by the present council cathaoirleach cllr John King to recognise farmers in Laois for their work and good environmental practices which they carry out on a daily basis on their farms.

The competition was open to all farm managers, owners, workers and farmers based in Laois.

Following his award, Pat Kavanagh, who has farmed the lands which have been in the family for over seven generations, said that he was thrilled with the win. 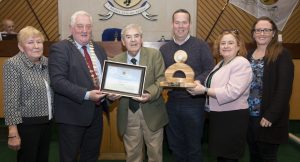 Members of the winning farmers’ families were also present for the occasion, as were representatives of the IFA and Teagasc, John Fitzpatrick and Con Moloney.

Cathaoirleach King said: “As a farmer myself, I know the great work that farmers do. It can be a very lonely life.”

He said that there had been good interest in the competition, with a lot of entries from dairy, tillage, grass and beef farmers.

Cllr Willie Aird said that he, too, was a full-time farmer and he said the awards were fitting. He said that when it comes to good environmental practises: “farmers go above and beyond the call of duty and it’s not just farmers who benefit from this, but everybody else does, too.”

Cllr Tom Mulhall said: “Farmyards are now spotlessly clean, what with health and safety a big thing on farms now.

“In 2005 we lost our sugar industry. When talk of Brexit started, we lost our mushroom industry and now the beef industry is not terribly far from collapse either.”

Cllr Mary Sweeney said: “This is an excellent awards idea. It’s a huge compliment to the farming community in Laois, with their perfect yards and buildings.”

Cllr Pauline Madigan said that she, too, comes from a farming background, that her brother now farms and congratulates the winners and all those who took part.

She recalled as a young girl reusing bags the cattle nuts came in, adding: “Farmers. We hate waste. We just do not like waste,” which led cllr Noel Tuohy to quip: “I hope Pauline Madigan’s brother has a farm big enough so, to take the one million election posters after the election.”

Cllr Ben Brennan said that he, too, was from a farming background and said that farmers face a lot of dangers on their farms nowadays.