Relieved and contented but Brennan knows work still to be done 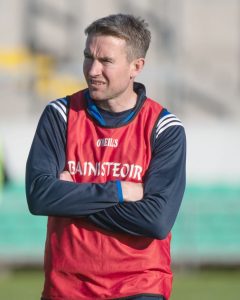 LAOIS manager looked mighty relieved when he spoke to the media after seeing off a determined Offaly in the Joe McDonagh Cup opening round. It had been a tension filled contest with the outcome in doubt up to the 79th minute.
“A mighty battle,” was how Eddie Brennan described the game.
“But I expected nothing less to be honest. I said that, you expect that when you’re coming over to Tullamore, and that Offaly team are fighting for their lives so I didn’t expect anything to be handed to us here for sure and I think we definitely had to earn that win, he added.”
In the run up to Saturday’s game Brennan spoke of how all he expected from his players was honesty, and he got that in spades in O’Connor Park.
“They definitely gave us heart failure at times on the sideline but look a win is a win. I think we really had to dig it out, there was occasions where we took a few sucker punches but I was really proud of the way the boys the responded more than anything else,” he said.
“That’s the one thing we said, we wanted them to stick at it and stick at it and in fairness they did that. Every time we took a hit for a goal, and we lived dangerously there for a little while too, the lads put their bodies on the line.
“Matthew Whelan took a full blow of a hurling ball straight into the ear, they’re the little things that are the difference on championship days.”
And while there may have been some concerns at conceding three goals, Brennan was looking at the positives, and in particular the commitment of the players.
“I was just pleased with how we applied ourselves, there’s plenty to work on, there’s no doubt about that, but I think the players can be proud of how they went about their business today.
“They (Offaly) were coming at us hard at times but I think the lads dealt well with it. They did a bit of re-organising and it was a very, very physical match too. Good physical hits, which is what championship hurling is about,” he said.
Another aspect of Brennan’s thoughts in the run up to the game was the importance of the panel. He said every single player would be needed over the course of the competition and the panel displayed its worth on Saturday. Five substitutes were introduced, Conor Phelan, Neil Foyle, Aaron Dunphy, Stephen Bergin and Eric Killeen.
“Our five subs, every single one of them put in something today. Eric Killeen was on the field for five minutes and he plucked a ball and carried it out. Subs were the difference today for us, they made a contribution. That’s the pleasing aspect for me, that the 15 on the pitch at the end of the match are equally as important.”
Another pleasing aspect of Laois’s performance was how the team were going just as strong in the 79th minute as they were in the first half.
“Championship hurling is about going to that 74th, 75th and 79th minute, that’s what it’s all about. It’s about being composed, not being afraid to attack the ball. Keep attacking that ball and keep pushing forward,” said the manager.
While delighted to come away from O’Connor Park with the win he was still honest enough to accept that there were some facits of the team’s performance that would need addressing.
“There was a lot of mistakes made, 11 wides in the first half, but it didn’t stop the boys from shooting and having a go. In any championship match you have to see it out, you can’t just pack it up. All in all (it was) a good performance but there is plenty to work on,” he said.
And looking forward to Saturday next and Antrim in O’Moore Park?
“I think they (Laois players) can be very proud of that but it is only the first match won and in the morning we’ll reset, we’ll go again. Antrim had a fine win over Kerry and we’ll be very mindful of that. We have to recover very quickly, such is the structure of championship hurling” he said.
“I think next week we have to be very tuned in. To get a win on the road is massive but we have to be really, really focused at home now.”