AN audience of 80 people crowded into the classroom of the old school in Vicarstown on Friday night 26 April. The crowd had assembled there in spite of storm Hannah’s whisperings that they should stay in their homes that evening.

The reason for the gathering was a lecture being delivered by Dr James Kelly of Dublin City University of the subject of the Life and times of Henry Grattan. Dr Kelly emphasised Grattan’s long political career, from his first entry to the Irish parliament in 1775, at the age of 29, until his death in 1820. His untiring work for legislative independence, which he had partially achieved in 1782 but which was sadly undermined by what followed in 1798 and the Act of Union. 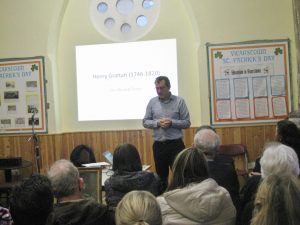 Henry Grattan’s connection with Vicarstown began after parliament, to show their gratitude, voted him the sum of £50,000 with which he bought, from the Cosby family, what he called his Moyanna estate, an area which included the present village. That connection continued after his death in 1820, with his son Michael building a bridge over the river Barrow just down the road. His granddaughter built the local school in 1867 and it was in this building that the lecture took place.

A beautiful little building, it is in fine condition, being wonderfully cared for by a committee. A lot of ongoing repair work needs to be carried out to keep it in this state and that requires money, so the committee is grateful to all who attended.

Following the lecture, there was a short question and answer session with Dr Kelly and then all present partook in refreshments.