A BALLYROAN family are happy campers after winning an award for their quirky glamping site.

Family-run Glamping under the Stars in Cullenagh won the ‘Best Caravan/Camping/Glamping Experience’ title in the 2019 Midlands 103 hospitality awards.

It was a week of celebration for Ballyroan man Barry Fingleton, his wife Kyra and the extended family, as the boutique glamping site has also just marked its third birthday.

Kyra said: “We are so delighted that our magical little glampsite has been recognised as something extra-special by the judges. Visitors have returned to glamp with us every year since we opened, so we must be doing something right.” 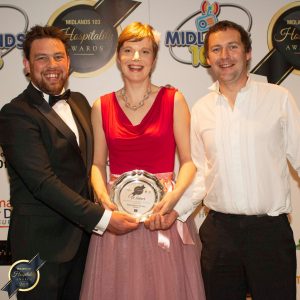 Kyra and Brian Fingleton pictured receiving the award for their ‘Glamping under the Stars’ site near Ballyroan, at the Midlands 103 hospitality awards

Located in idyllic countryside just outside Ballyroan village, the site is becoming increasingly popular among fans of “glamorous camping”, people who love the great outdoors but still want their creature comforts.

The beautiful self-catering site has a variety of bell tents, wood lodges and a shepherd’s hut, all with electricity and proper beds, luxurious bathrooms, a campfire area and a communal kitchen-diner that includes barbecue facilities and a wood-fired pizza oven.

Guests can toast marshmallows around the campfire, sit out under the night sky with a glass of wine and let the kids run free in safe green spaces. There is a children’s playhouse, sandpit and fairy house, as well as woodland walks on the doorstep. The glampsite can also be hired out for private hen or birthday parties.

Though glamping is a relatively new concept, the award category was quite broad and included competition from businesses in Offaly and Westmeath.