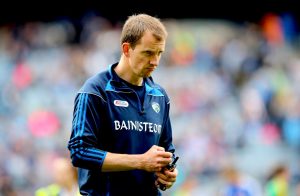 Laois manager John Sugrue was not a happy camper after the game in Croke Park Photo: INPHO/Ryan Byrne

SINCE his appointment the one thing us scribes have gotten used to is John Sugrue speaking his mind, wearing his heart on his sleeve. On Sunday in the bowels of the Cusack Stand the Kerry man once again displayed the emotions of a man bitterly disappointed with the outcome of a game.
Sugrue, like any manager, relishes winning games but almost seems to taking games personally. It is something that does not settle well with him.
The first words out of his mouth were: “It was very disappointing. The scoreboard doesn’t lie with regard to that game. At times we had plenty of possession but we didn’t execute up front and maybe lacked a bit of penetration. It is back to the drawing board now for us.”
The fact that Meath scored three goals while Laois not only failed to find the net, they also saw a number of golden opportunities missed.
In the second half through Paul Kingston had an effort saved, Colm Murphy’s shot rattled the cross bar, Kieran Lillis pulled an effort badly wide while Donie Kingston denied by a fantastic save from the Meath net minder.
Laois weren’t much more productive on the point scoring scene taking until the 15th minute to open their account and only scoring four points oin the second half.
Sugrue’s take on this was: “We were a little bit toothless with the ball and lacked penetration. Meath were well set up but we could and should have been better in that phase (the opening 15 minutes).
“I think we had two very good goal chances in the second half in particular. Murph (Colm Murphy) cut in well along the end-line and had a good shot but it just came back off the crossbar.
“We probably missed 1-2 at the start of the second half in a seven or eight minute period after getting the first two points and closing the gap back to three. We didn’t execute and they played some nice football in the last 10 or 15 minutes. We have to take it on the chin.”
For many the two pivotal moments came late in the first half.
Many Laois supporters were surprised to see Evan O’Carroll substituted just on the half hour mark. The Crettyard forward had led Laois to victory against Westmeath and while he kicked a few wides on Sunday, he was winning ball and keeping the Meath defence on their toes.
The manager confirmed O’Carroll had not picked up an injury. “No injury, it was a tactical change. It is on any given day, you get a flow of play or you don’t get a flow of play. There were lots of them who didn’t find the gear that they did the last day so it is not singled out to any one player.”
The other was the penalty award just before the break.
“Meath got a goal from a penalty that came from a speculative shot that turned into a goal from very little. In saying that, we didn’t deal with that ball well either. Despite not playing well, I thought we had battled well enough to keep ourselves within two. The penalty came from nothing really and all of a sudden you wind up with a goal out of nowhere and that was very disappointing.”
But as they say that is all history now and Sugrue and his back room team now have to plan for the long trek to Derry for what will be one of the sternest tests this team will have faced.