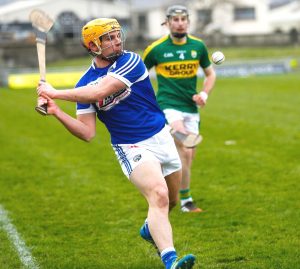 It was great to see Cha Dwyer back to his best for Laois against Kerry at Austin Stack Park, Tralee on Sunday         Photo: Joe Hanley

THERE will be much relief in Laois hurling circles that Laois have qualified for the Joe McDonagh Cup final with a game to spare. They made sure of their date in Croke Park when they have too much firepower for Kerry in Tralee on Sunday.
The scoreline looks much more one-sided than it was. In the end Laois had eight points to spare but Kerry too had goal chances but did not take them and they were denied on a number of occasions by Enda Rowland.
Kerry got off to the far better start, looking the sharper and for those first five or six minutes there was a feeling that once again Laois were going to come a cropper in Tralee. But two goals in the space of 90 seconds changed the entire perspective of this game.
That is not to say that Kerry went away or gave up the chase, far from it. The fact is that both sides recorded 22 scores but the difference was that Laois had the ability to open up Kerry’s defence to raise green flags.
A combination of Kerry grit and determination allied to Laois fading in and out of the game was still in the melting pot into the second half and another two goal salvo from Laois. But still Kerry battled away and on this form could very easily get the better of Offaly next week.
But back to the game, Kerry’s outstanding player, Shane Conway opened their account with a point just 30 seconds into the game. Their other class act Padraig Boyle made it two a minute later.
Jack Kelly opened Laois’s account in the fourth minute with an excellent strike from out wide on the right. Two great points from Kerry’s Michael O’Leary and Neil Foyle kept one between the sides with five minutes on the clock. But in the blink of an eye that all changed. Foyle spotted Aaron Dunphy making a run in behind the Kerry defence, sent in a perfect pass and the Borris/Kilcotton player drilled the sliotar to the net.
Soon after Paddy Purcell sent a long delivery into the danger area where Cha Dwyer passed it onto Ross King and he buried it in the net.
Laois were in full flow now, commanding affairs all over the field. Two Stephen Maher frees sandwiched a good point from King and with 13 minutes on the clock eight points separated the sides.
Laois looked to lose their concentration which allowed Kerry get a foothold back in the game. When Joe Phelan failed to deal with Colum Harty’s long delivery Padraig Boyle pounced and beat Enda Rowland in the Laois goal.
A super point from Daniel Collins was cancelled out by Cha Dwyer but the home side kept eating into Laois’s lead with points from Shane Conway and O’Leary to narrow the gap to three points 21 minutes in.
Not for the first time, and not for the last, the Laois attack once again opened up the Kerry defence. This time Cha Dwyer was the provider when he delivered a perfectly timed pass to Paddy Purcell on the run. He picked out his club mate Ross King who drilled s hot between the goalkeeper and the post from a very narrow angle.
Again Laois we on a flow. Aaron Dunphy saw his shot go over off the post. Foyle followed with another point while Maher added a brace, one a free to open up a ten point gap with eight minutes to go to half time.
But just like earlier in the half they one again let Kerry back into the game. Shane Conway (free) and Padraig Boyle pointed while Aaron Dunphy stroked a beauty over the black spot.
Kerry went on to finish the half the stronger with points from Conway and two beauties from Padraig Boyle closing the gap to two goals at the break, Laois leading 3-11 to 1-11.
It probably should have been a lot closer as Kerry had butchered a couple of goal chances and Boyle was denied a second goal by Enda Rowland.
The second half opened in similar style to the first. Jack Golding was first on target before Boyle scored as good a point as you will ever see.
Stephen Maher converted a free before Cha Dwyer got on the end of a sweeping move to clinically finish to the net. There was now no way back for Kerry but the never dropped their heads.
Conway converted two 65s in quick succession before Paddy Purcell rattled the net after the Kerry defence were slow to clear a long delivery from Cha Dwyer. The game was no definitely up for Kerry.
Shane Conway continued to torment the Laois defence in play and with frees. A brace from him were separated by a Cha Dwyer score. The two Dunphys, Aaron and Willie raised green flags before Conway converted another two frees.
Cha Dwyer and Maher rounded off Laois’s scoring for the day while Kerry’s last point was a massive effort by Michael Boyle from deep inside his own half.
As it stands Laois have qualified for the final but after that it is far from clear. Mathematically any of the other four teams could advance to the final depending on how other games go. But that won’t be worrying in Eddie Brennan.