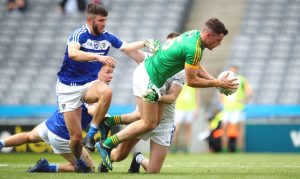 The moment Meath’s Donal Keogan was judged to have been fouled by Graham Brody to win a penalty for Meath Photo: INPHO/Ryan Byrne

IN the aftermath of this defeat Laois manager said the scoreboard didn’t lie and how right he was. It is an old and perhaps overused cliché, but goals do win games. The difference in Croke Park on Sunday was that while Meath were scoring goals Laois spurned several good chances to raise green flags.
That may seem over simplistic but for a long period Laois were still very much in this game, that despite the injury time penalty goal just before half time.
Five points down, Laois still had everything to play for and things weren’t looking too bad when they had reduced the gap to three points within seven minutes of the restart, but after that it all went pear-shaped.
Laois were to score just another two points before the full time whistle and in contrast Meath rattled off another goal and seven points.
Action in the opening 15 minutes of this game was virtually non-existent. Meath corner back Seamus Levin had got the scoring underway with a point after 90 seconds but that was that for another 13 minutes.
Laois had the majority of possession and held onto the ball denying Meath any ownership of it. But they were creating little in the way of scoring opportunities. Meath were happy to drop back deep, close down the space and keep the Laois forwards at bay.
Evan O’Carroll levelled affairs with a 15th minute free after Damien O’Carroll had been clobbered. But James Conlon replied immediately, and the Meath corner forward was to torment Laois for the rest of the half.
He scored two further points which were matched by O’Carroll (free) and a good point finished by Colm Murphy after John O’Loughlin caught Graham Brody’s kick out.
Murphy looked set to level the game but his effort was brilliantly blocked, however, the rebound fell to Conor Boyle who passed to Murphy to fist over for the equaliser with 24 minutes on the clock.
Inside a minute Meath were back in front when Ben Brennan placed Conlon to split the posts.
Another free from O’Carroll had the sides together again in the 29th minute but seconds later the Crettyard player was called ashore to be replaced by Donie Kingston.
And while Laois supporters were still trying to digest this change Meath struck for their first goal. Cillian O’Sullivan spotted Bryan Menton charging through the middle, gave him the ball and he finished to the net underneath the advancing Graham Brody.
Donie Kingston and Bryan McMahon swapped points before Kingston picked out Danny O’Reilly with a delightful pass and the Graiguecullen player split the posts as we approached half time.
Had it stayed like that, Laois behind by two at half time, Laois supports and manager John Sugrue would surely have been happy, but there was to be one more twist to the tae before the break.
Meath’s Michael Newman ballooned a speculative long range effort into the clouds. It seemed to be going nowhere but dropped into the small square in front of the Laois goals were Donal Keogan gathered unchallenged.
The Meath half-back was then deemed to have been fouled by Laois keeper Brody and referee Joe McQuillan pointed to the penalty spot. Newman took on the responsibility and drilled the ball beyond Brody for what probably proved to be the killer blow from which Laois never really recovered.
Laois had a mountain to climb but looked set to narrow the gap straight from the throw-in when Paul Kingston cut in from the right but his shot on goal was blocked by Andrew Colgan. The rebound fell to Conor Boyle who somehow shot wide.
Minutes later Donie Kingston beat two defenders to score a great point.
Laois were moving well. O’Reilly placed Colm Murphy and the Portarlington player rode two tackles before unleashing a rocket of a shot that came back off the crossbar. This was going to be the story of Laois’s afternoon.
That said when Donie Brennan converted a 42nd minute free Laois had closed the gap to just three points and very much still in the contest. But that was as good as it got, and things quickly went down hill after that.
Newman and O’Sullivan tacked on points while the only reply from Laois was a long range free from Donie Kingston. In the middle of all this Kinston passed to Kieran Lillis in behind the Meath defence. The Portlaosie player looked for a goal but drove the ball well across the goalmouth and wide. Maybe he should have taken his point.
Meath were sensing blood and they were going for the jugular. They upped the pace and rattle off three points in quick succession, O’Sullivan, McMahon and Conlon on target.
With 59 minutes on the clock it looked like Laois were about to get the goal they so badly needed. Donie Kingston worked himself into a position to the left of goal and unleashed what looked like an unstoppable shot only to be denied by a brilliant full length save by Andrew Colgan.
Almost immediately after any doubt as to the final outcome was quenched when Meath broke down field and Menton buried the ball beyond Graham Brody’s reach. Game over.
Meath substitute Graham Reilly added a point which was cancelled out by Laois substitute Ross Munnelly on the 70 minute mark.
The announcement of five minutes of time added on brought groans from the Laois supporters and the only score in this period came from Donal Keogan leaving 11 points between the sides at the final whistle.