HISTORY was made recently when a mother and daughter from the same club won all-Ireland titles at the national kickboxing championships.

Ten-year-old Ciara McPartlan and her mum Jen Bracken were part of the eight-strong team from Laois Martial Arts Club in Mountmellick, which competed in the finals.

Ciara came away with a gold medal, while her mum won gold and silver.

Several other club members were also crowned all-Ireland champions at the event, which took place over two weekends, the first in Monaghan and the second in Dublin.

In the first competition of the finals, eight-year-old Edward Comerford secured a top finish to become the club’s youngest all-Ireland champion. Following this success, Caitlin Knight came away with the national title in pointfighting, her second in as many years. 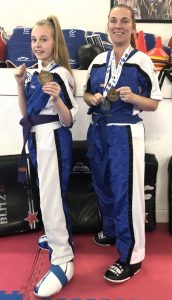 Ciara McPartlan and Jen Bracken who kick-boxed their way into the history books of the Laois Martial Club when they became the first ever daughter and mother from the club to win all-Ireland titles in the same national competition.

Shannon Conlon was unlucky not to have been crowned champion, but was happy to have secured a second bronze medal, while Cian O’Brien also won bronze in his first all-Ireland.

Next up for the team was Hannah Reinhardt, who won bronze. She was followed by her sister Amelia, who also secured a bronze medal in pointfighting and silver in light contact section. Senior member Jen Bracken also won her place to compete in round two of the championships.

On the second weekend, Shannon Conlon brought home a silver medal. She was followed by Caitlin Knight, who came away with another all-Ireland title. Ciara McPartlan then won her first all-Ireland title, with her mum Jen also on the winner’s list with a silver medal in pointfighting and gold in light contact.

Delighted with the outcome, the club’s head coach Shane Culleton said: “The fighters worked really hard and did so much preparation to be ready for the event. I am super proud of them all. What a great achievement for a small but great club from Co Laois. Caitlin Knight, Edward Comerford and Amelia Reinhardt will now represent Ireland at the European Championships in Hungary in August.

Next up for club members is the White Tiger Challenge, which will be followed by their own kickboxing event on Sunday 14 July.