THOUSANDS of fish have been wiped out in the Blackwater and Owenass rivers, which run through Mountmellick.

Dead fish floating on top of the water were first noticed by a man walking along the bank of the Owenass on Friday evening. He subsequently alerted members of Mountmellick Angling Association.

During a follow-up examination of the river bank, members of the angling club discovered hundreds of dead brown trout. They contacted the Inland Fisheries Board, which dispatched officers on Saturday and Sunday, who found thousands of dead brown trout, minnow, crayfish and salmon parr along a five-mile stretch of the Owenass. 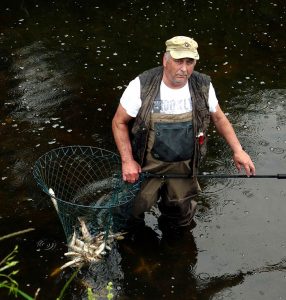 It’s understood that fisheries officials located a silage run-off on the River Blackwater, which they suspect is the source of the contamination.

Mountmellick Angling Association PRO Paul Lalor said it’s at least six years since the last major fish kill on the River Triogue, which is a tributary of the Owenass.

“It’s very disheartening. I’d say up to 95% of the fish life in the river has been wiped out. While fish floating on top of the water looks horrible enough, what’s more damaging is what’s happened below the water level on the riverbed. We found hundreds of dead crayfish. They live on the bottom. Young fly hatch also live under the water, so they, too, could be wiped out as well as the plant life. They’ll have nothing to live on.

“The low oxygen levels in the water kills everything in it. The thousands of young brown trout that we had were wild and cannot be restocked or replaced because they breed naturally. Silage effluent is highly toxic. It’s 100% more deadly than raw sewage. It will also kill the macro invertebrates that the fish live on. It’ll take years to try and get the river back to where it was.”

Mr Lalor said that a meeting took place yesterday afternoon with officials from the fisheries board and his members. He confirmed that the site has been identified wand remedial works have already begun to contain the leak into the river.

The club’s PRO has also asked people not to fish or allow their dogs into the river until the end of the year so as not to stir up or disturb the riverbed. It will allow time for the river to begin its recovery, which he said might take up to ten years.