TOP comedian and self-confessed “feckin’ eejit” Bernard O’Shea from Durrow is about to publish his first book about the traumas and trials of family life.

Gill Books will release what they describe as “a hilarious debut” from the high-profile   Laois man next autumn and it is already available to pre-order.

Unceremoniously titled My wife is married to a feckin’ eejit, the book explores nearly 12 years of fights and flights, holiday disasters and tantrums involving Bernard, his long-suffering wife Lorna and their three children. The book will hit shop shelves on Friday 11 October. 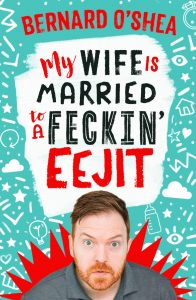 The cover of Durrow comedian Bernard O’Shea’s first book, which will be published in October

Christened “a feckin’ eejit” by his wife, no doubt with just cause, Bernard says that when he asked her to list the top-three most stupid things he ever did, she immediately reeled off 20. The long list of shame includes the time he walked into a glass door on their first holiday together; the ‘great dishwasher row of 2009’; his various attempts at weight loss; a disastrous caravan holiday in rural Ireland; dyeing all their clothes green; and his hopeless attempts at DIY.

Currently living in Dublin but a regular visitor home to Durrow, Bernard has performed at comedy festivals around the world, including Montreal and Edinburgh.

He first made his name on RTÉ’s Republic of Telly, before co-writing and co-starring in other shows such as Bridget & Eamon and this year’s Marty and Bernard’s big adventure.

With three sisters Marian, Siobhán and Cáit, Bernard is the only son of Mary and the late John O’Shea, who was a garda stationed in Abbeyleix and Ballinakill until he retired in the 1980s. John was laid to rest in the parish cemetery in Durrow after he sadly passed away last year and many of the family still live in the town and surrounding areas.