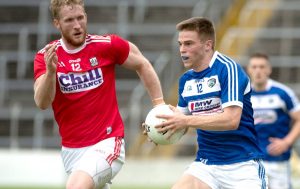 LAOIS’S hopes of making the Super 8s were well and truly dashed in Thurles on Saturday evening when they had their wings firmly clipped by Cork.
This was always going to be a tough assignment for the O’Moores, one that few saw Laois overcoming but it was the nature of and the size of the defeat that hurt most.
There was nothing to separate the side for 25 minutes but Cork always looked menacing. Outscoring Laois six points to one in those final ten minutes of the first half had the alarms bells ringing.
A five point deficit was not insurmountable but when Cork struck for twp goals within eight minutes of the restart it was game over.
Laois got off to a good start and it could have been a great start. With less than a minute on the clock Donie Kingston cut in from 25 metres out on the left wing. He got round his marker. Bore down and goal but with a covering tackle coming in he was forced to shoot from left to right with the outside of his right boot and unfortunately to ball sailed just wide of the far post.
But there was to be some reward for the Arles Killeen talisman when Marty Scully was fouled and Donie converted the free. Minutes later he converted his second free of the afternoon.
And as was the way for most of this opening half Cork came racing back into contention. Mark Collins opened their account with a free while Brian Hurley Added the second from play.
Eoin Lowry found the target from out wide on the right for a great point which was cancelled out by Mark Collins but only with the aid of Hawkeye.
Paul Kingston picked out brother Donie with a beautiful diagonal pass and he edged Laois back in front but only temporarily as Collins converted another free in the 18th minute.
The same player again got the benefit of Hawkeye and with Kevin O’Driscoll finding the target Cork had opened up a two point lead 22 minutes in.
Within three minutes the sides were level again. Colm Murphy struck and fantastic point from an impossible angle out wide on the right and when the same player was fouled Donie converted the free.
Unfortunately from here t the end things began to go downhill for Laois. Cork were lording it in the middle of the field denying Laois possession time and time again.
Cork’s twin spearhead of Collins and Hurley were to rattle off a brace apiece before the break along with singles from Ronan O’Toole and Ruairí Deane while Laois’s only response was another Donie Kingston free.
Trailing by five, 0-12 to 0-7, Laois needed the break, time to hopefully regroup and settle into a second half resurgence. However, Cork had other ideas and quickly affirmed their superiority.
Almost straight from the throw-in half time substitute Paul Kerrigan sent a long delivery from the right wing into the danger area. It looked like the ball was going wide but Collins managed to get a hand to it and bat it back in front of goal where the in-running Hurley half-volleyed it to the net.
When Liam O’Donovan and Hurley added points Cork were firmly in the driving seat and they were not prepared to show any mercy.
Six minutes into the new half Hurley again found the net after collecting and long diagonal pass, rounding Denis Booth and blasting past the hapless Graham Brody. And for good measure Collins almost immediately added a point from a free.
Both sides now introduced a raft of subs and in the middle of all this Donie Kingston (free) and Trevor Collins raised white flags but there was to be no respite for Laois.
Those two points were cancelled out by Collins and Deane and Cork struck for a third goal in the third quarter when Hurley turned provider for Collins to beat Brody.
The Laois players to their credit never dropped their heads and kept battling away. Substitute Mark Barry landed a 52nd minute point and a minute later Marty Scully scored Laois’s only goal. Substitute Evan O’Carroll pooped a pass to Donie Kingston who spotted Scully on a run, passed to him and the Ballyroan Abbey player blasted past Mark White.
Laois finished the game strongly but by now Cork were on their way to the Super 8s. Donie Kingston who had led the line almost singlehandedly throughout scored four more points bringing his personal tally to 10 while Evan O’Carroll also raised a white flag after his goal effort had been blocked.
Cork however tacked a further three points to their total and the icing on their cake came in the 65th minute when Kerrigan struck for their four goal and he might have had another in injury time but Brody did well to deny him.
And so for the second year running Laois exit the championship at the same stage but can look back at having gained promotion for the second successive year under John Sugrue’s management. The only remaining question unanswered is whether the Kerry man will take the reins for a third year. Most Laois supporters will be hoping he does.