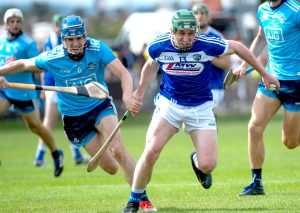 IT may be a long way to Tipperary but for Laois hurlers they have made the journey. Seventy years after they played their last All-Ireland final against the Premier County they now square up to the beaten Munster finalists at headquarters as a result of their stunning performance in O’Moore Park on Sunday against red hot favourites Dublin.
How was it achieved? Well it was simple enough. After a blistering start that saw Cha Dwyer and Mark Kavanagh post two early points and Laois were comfortable until Oisin O’Rourke opened the Dublin account from a free and then levelled matters from a second free.
Had Laois decided to sit back and soak up the expected Dublin pressure it might have been a different outcome instead they hit the next three scores. Paddy Purcell pointed on the run. In the ninth minute Willie Dunphy chased down a ball close to the end line he shouold never have got to, then slipped his marker and swung a vicious ball towards the Dublin goal. The keeper, Alan Nolan blocked it into the path of Aaron Dunphy and after his heroics a week earlier he was full of confidence and batted the sliotar to the net.
When Laois were awarded a free Mark Kavanagh posted his second point and the lead was five.
Dublin even at this stage looked a bit ragged but Oisin O’Rourke converted his second free only for Mark Kavanagh to do the same at the other end. But before that Willie Dunphy again caused havoc slipping the cover to whip the ball over the crossbar.
Dublin responded with their second score from play by Cian Boland but immediately Mark Kavanagh pointed at the Abbeyleix end. Dublin suddenly looked picked up the pace with full forward Ronan Hayes scoring twice. Then in the 20th minute Eamon Dillon pointed leaving just the goal separating the sides.
The next score would be cruicial. Laois missed a few chances but under pressure Dublin also hit three awful wides.
Kavanagh and Ross King both found the target before O’Rourke pulled one back after 30 minutes. Enda Rowland denied the visitors a goal but a free in had been blown.
Laois added two more hard earned points, one by Jack Kelly before Paudge Delaney fed Mark Kavanagh for a great point from play. Dublin hit a bad wide but Cha Dwyer split the uprights in the 33rd minute to see the home side in front by seven.
Dublin hit back with points by Danny Sutcliffe and Conal Keaney cutting the deficit to five points at the break and Laois knew they might have been further ahead.
The home crowd rose to acclaim the team as they departed for the break but could the real Dublin come out after the interval.
The opening minutes were frantic but the Dublin attack hit three more awful wides while O’Rourke opened the scoring from a free. Cian Boland then pointed from play twice in as many minutes.
Willie Dunphy replied at the other end but despite hitting two incredible wides from frees O’Rourke did reduce the margin to two points after 44 minutes.
Laois refused to panic and Joe Phelan picked out Aaron Dunphy and the Borris/Kilcotton man raised the roof with a great point after 50 minutes. Laois went four clear after a foul on Paddy Purcell and at the other end Enda Rowland denied the visitors with another great block.
By now Oisin O’Rourke had found his shooting touch again landing two frees while Danny Sutcliffe cut the margin to the minimum. And when O’Rourke stood over a free in the 54th minute he drew great applause as the score read 1-15 to 0-18.
Now was the real test of character for the home side but within three minutes Laois had posted three points from Willie Dunphy, Mark Kavanagh and Arron Dunphy.
O’Rourke pulled one back but on the hour mark Enda Rowland fired over a great point from a free. Dublin were making changes and O’Rourke narrowed the gap to three on 66 minutes.
Could Laois survive as Dublin were looking desperate to save their summer and a point from play by O’Rourke cut the margin to two. The clock was ticking away as Laois supporters roared on their heroes but hanging on to a two point lead was not easy to watch.
Dublin had scored seven goals in the championship and three in their most recent game with Galway. Then a short puck out to Lee Cleere looked like causing trouble but when the referee indicated for a free out this was a chance to kill time after three minutes of added time had been signalled. Enda Rowland took his time and with perfection he split the posts with a massive strike from inside his own 45 metre line in the shadow of the stand. Now two became three.
Dublin had only time to get a goal when the outstanding John Lennon ensured a Dublin forward was not getting any closer to goal. The referee indicated a free in and at the same time sent off the Laois sweeper on a second yellow card.
Sean Moran came up to shoot for goal but to the utter relief of the huge Laois following Enda Rowland got out in front to block the ball which spun over the crossbar and the crowd erupted.
Laois were through to a quarter final for the first time in forty years.
If Dublin were in shock it was ecstasy for the O’Moores bringing back memories of that famous victory over the Faithful County here four years ago but much greater achievement. Now it’s Tipperary, another huge ask but that will not faze this team.