Brennan can’t hide his delight for the players 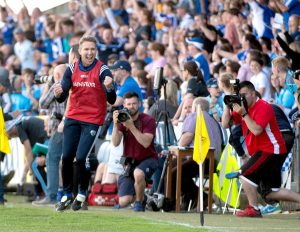 Laois manager Eddie Brennan has enjoyed many successes as a player with Kilkenny but Laois’s defeat of Dublin on Sunday matched any of those for the Graigue-Ballycallan man Photo: Denis Byrne

LAOIS manager Eddie Brennan has experienced some great days as a hurler but talking to him on Sunday you felt there was something that extra bit special about this win.
In one word he summed up how he saw this win: “Phenomenal”. But then he wasn’t overly surprised.
“I left here on Friday evening after a meeting with the players and I remember ringing Niall Corcoran on the way and said to him I think we’re right here, I think we have them’,” he said.
And as always he shines the spotlight on the players rather than the management team.
“The players, they drove on the meeting, they drove on the training and they could have been very easily forgiven for going through the motions. I wouldn’t insult the players by saying that about them because they are not type of a bunch, and when they believe in themselves that was the difference today.
“We said to them don’t be afraid of the occasion, go enjoy it and go at it, If anyone is under pressure today it is the guys up the hall (Dublin).
“Right from minute one our tackles were on the meat, we set the tone. To get a shot in the arm of a early goal was just brilliant. Every time Dublin responded we were able to go back up and keep punching at them. That’s been a trait of this team all year long.
“You look at matches where we took good beatings this year in the league against Waterford and Galway and we still punched strongly at them at times in those matches so I said it’s there. We kept it very simple for them. Their skill level is unquestionable and all it was about was focussing on that and believing in what they were doing.
“Today was something that grew in this bunch of players, their spirit and their heart. It was said to me when I came up here initially that there were a lot of issues, but I have to say none of that was brought into our dressing-room. Every single one of those players had each others backs no matter what they done.
“They enjoyed Sunday night (after winning the McDonagh Cup), and Monday as well, and no problem. When they came back in here on Tuesday evening not one of them grumbled or groaned. That was a sign for me that there is something here. They believed in each other as much as anything.”
What amazed many was that the players could put in such a physical effort on Sunday after the exertions of a week earlier.
“I was concerned when Dublin got on a bit of a run after half time and I though who do we get in. There was going to be periods when they’d come at us and I thought is this going to be where it catches up on us. To be fair to the lads they just refused to come off.
“There was two or three of them went down injured. Lee Cleere is brilliant like that. You go into Lee and he’d be in a hape on the ground and he’d go ‘I’m not going off, I’m grand’. That’s spirit, spirit to refuse to listen to your legs, you’re head is just so powerful.”
And what about Enda Rowland’s saves and frees”
“Enda has been a key player for us and he’s a great character too. He’s a guy a lot of the players look up to and he’s a guy who really takes his job seriously. He found men left, right and centre. He found them short, he found them long and then when he needed to he popped up a monster point.”
Thinking ahead to next Sunday the manager said: “There’ll be some scramble for tickets now. There’ll be a few more trains booked from Ballybrophy. It’s brilliant, I’m just happy for the players.”