BIKERS from around many parts of Ireland converged on Portlaoise on Sunday to fulfill a dream of a terminally ill five-year-old boy.

Over 200 bikers rallied to a callout about little Shane Brophy Buggy and his dreams of riding a motorbike.

The bikers sprung their surprise when they learned that Shane’s family were holding an early birthday party for him in the Midland Court Hotel, Portlaoise.

A family member said: “For the past three years, Shane has been brought by his mother Elaine up and down to the children’s hospital in Crumlin for chemotherapy and other medical supports. Two weeks ago, he received his second and final round of chemo from Crumlin hospital and now attends Portlaoise hospital on a daily basis for morphine and other medication.”

Shane, who comes from Portlaoise but loves staying with his granddad John Brophy in Crettyard, has a six-year-old a brother Scott and sister Layla, who is 18 months old.

The family member, who did not wish to be named, said: “A few of us got together after he was released from Crumlin hospital to plan an early birthday party for him (he will be six on Friday 19 July). 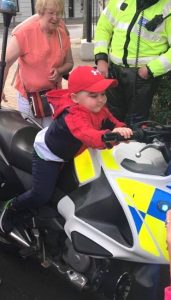 “Someone got in contact with Aoibheann’s Pink Tie (the National Children’s Cancer Charity) who, when they heard what was planned for Shane, told us not to worry about anything that they would help us set up his day.

“When we went into the room in the hotel, we couldn’t believe our eyes. There were balloons everywhere. They had a magician, a ‘Superman,’ face painters, a basketball hoop, a DJ, ride-on cars and a big banner across the room that read ‘Shane’s Big Birthday Bash.’ There were about 100 family members and friends there. It was a terrific event.”

“I suppose how the bikers came on board was that Shane’s nanny Kathleen knew that Shane was big into motorbikes and we knew someone who was a member of the Maverick’s Motorbike Club in Mountmellick. From there, someone shared on Facebook and it just seemed to be have been shared all around Ireland.”

She said: “It was a great surprise for Shane when he came out of the hotel. There were 100s of motorbikes waiting for him. Even the gardaí, Eoin Gardener and Joe Fahey, turned up on their motorbikes. They came from Cork, Wexford, Kildare, Athlone, Cavan, Longford and Clonmel.”

Those who spread the word about the bike gathering included John Travers from Mountrath Bikers Shed, the president of the Maverick’s Motor Cycle Club in Mountmellick Barry Carroll, members of the Green Knights Military Motorcycle Association and from the Clan na Gael Motor Cycle Club.

The family member said: “On behalf of the family, can I sincerely thank everyone for making the day so special for Shane. To the management and staff at the Midland Court Hotel, to Linda and her crew from Aoibheann’s Pink Tie, the local gardaí, the hundreds of bikers from around Ireland and a particular word of thanks to biker Dermot Shaw from the Maverick’s, who conveyed Shane around the town on his trike motorbike.

‘‘I also want to express our heartfelt thanks to all the doctors and nursing staff at both hospitals who have cared for Shane over the past few years.”

Laois has one new Covid-19 case