All-Ireland Camogie U/16 ‘B’ Championship 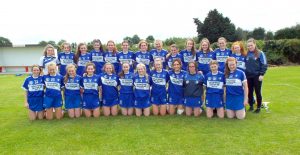 ON a weekend that saw two fierce battles in Croke Park, in Trumera on Sunday afternoon two teams battled into injury time in search of victory that would keep their season alive. Just like Kilkenny and Tipperary, Laois got scores when needed most and will contest the All-Ireland semi-final but they were made to fight all the way.
Once again Trumera pitch was in perfect condition and within a minute Laois were in front thanks to a well worked goal by full forward Amy Flanagan after a great ball in from midfield by Grainne Delaney. Armagh replied immediately with a point from Casey Mullan from a free.
A minute later Armagh struck for a goal by Katie Comiskey and went further in front with a point by Niamh Murphy. At this stage the visitors were dictating. Despite this Andrea Scully pointed twice from placed balls but Armagh were winning a lot of possession. Points by Casey Mullan saw them two in front after 20 minutes.
Laois then hit a purple patch with Andre Scully posting two frees and Aiva Coss from play leaving the O’Moores back in front. Armagh replied with a brace from Casey Mullan to regain the lead with two minutes remaining in the first half.
It seemed that was how it would remain but Laois put together a great move that yielded a vital goal. Full forward Amy Flanagan picked out the in-running Grainne Delaney who smashed past the visiting keeper leaving the hosts in front 2-6 to 1-7. Laois management were hardly pleased but at least they were in front if only just.
The second half began as did the first, Laois gaining possession from the throw in and a high ball into the square saw the O’Moores full forward Amy Flanagan beat the keeper with a rasping shot and extend the advantage to five.
Armagh had not gone away and three minutes later they won possession and midfielder Sinead Quinn beat the keeper from close range while at the other end Andrea Scully untypically sent a free wide.
Hannagh O’Connor brought the teams level in the 42nd minute with a great point from distance. Laois then forced two 45s in succession, both converted by Andrea Scully but in between Armagh sharp shooter Casey Mullan converted a free.
With eight minutes remaining Laois clung to a one point advantage but a superb strike by centre back Jill Gaughan put two between the teams with four minutes remaining.
Laois then hit two wides as they went all out for the insurance score and in injury time Andrea Scully sent over her sixth point to secure a three point advantage. Armagh won the puck out needing a goal but a great effort finished narrowly wide.
Laois needed only a draw but they are now assured of an All-Ireland semi-final place while on Sunday next the minors travel to St Laurence’s GAA complex in Kildare taking on Meath in the Leinster minor final.
This was another commendable under age performance by Laois showing the strides that have been made at this level in camogie but regardless of the opposition they will have work to do.