Laois sweep past the Lake girls into the Leinster final

Leinster Camogie U/18 ‘B’ Championship s/f 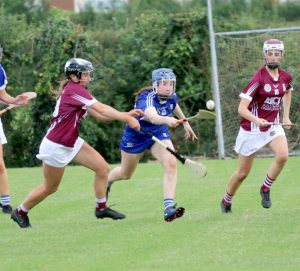 LAOIS would have entered the game on Wednesday evening. The under-16 team were in action last week picking up a few injuries and that affected the minor team. But having a big panel gave a few fringe players an opportunity to stake a claim and they certainly worked hard.
The scoreline does not do justice to Westmeath and had they played as well in the opening half as they did in the second it might have been much closer.
While the Laois attack will take the plaudits it was their defence that were simply outstanding. Goalkeeper Aedin Lowry brought off three point blank saves in the opening quarter and having to find replacements for the injured Sarah Fleming and Eireann Cole they defended stoutly.
They got a great start with points from team captain Alice Walsh, followed by brace from Zoe Daly and Kirsten Keenan. Shona Jones sent a perfect pass to Keenan who gave the keeper no chance and that put the home team 1-5 to 0-1 in front after 12 minutes.
Ten minutes before the break a long ball from Clodagh Tynan found Keenan and again she billowed the net. On the stroke of half time another great move saw Andrea Scully hammer past the keeper to leave the score at 3-9 to 0-2.
The second half saw a vastly improved Westmeath performance but the Laois defence continued to control the game. Laois were careless in the opening stages and hit three bad wides before points by Keenan (free) and Alice Walsh extended their advantage.
The Laois mentors made a few introductions like Roisin Phelan and long term injury Aimee Collier recovering from cruciate injury suffered in the corresponding game last year.
The visitors eventually beat the Laois keeper ten minutes from time but substitute Aimee Collier delivered a free into the Westmeath goalmouth that crashed off the crossbar where poacher Keenan caught the rebound and blasted her third and earn a place in the final.
Laois management would have preferred a greater challenge but the Westmeath girls worked hard right up to the final whistle. However, Laois were just too strong and had good players on every line. The defence were under greater pressure in the second half but they still dominated the game and regardless of their next opposition Laois would appear to have a great understanding from one to 15.
The final is scheduled for Sunday next 4 August at a time venue to be confirmed.
Congratulations to the Trumera club who had the pitch in immaculate condition and looked after both teams extremely well. Camogie find it difficult getting grounds at this time of the year but Trumera make an effort whenever possible.