Killeshin win the battle of the ‘Greens’ 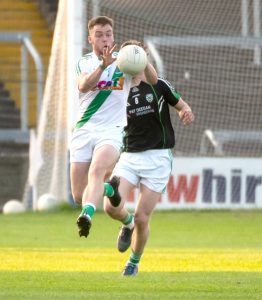 Killeshin’s Eoin Lowry gets out to this ball ahead of Stradbally’s Eoin Buggie during the SFC round one game in O’Moore Park on Friday night Photo: Denis Byrne

THOSE that had watched the game between Portlaoise and Ballylinan were hoping for a closer contest but after Killeshin changed into white to avoid a clash of colours there was only one team going to win.
When Brian Lowry and Luke Attride combined to race through the Stradbally defence Lowry took the last pass and hammered past the Stradbally net minder inside the opening minute.
David Aston and Eoin Lowry kicked quick points and already Stradbally supporters were fearing the worst. In their first three attacks Stradbally finished wide.
Luke Attride kicked his side’s third point after ten minutes. From the kick out Stradbally worked the ball to Darren Maher who calmly slid the ball to the right hand corner of the net. When Eoin Buggy posted a point it looked as if the Little Town were back on track.
But from the kick out Killeshin went down field and David Aston let fly. The keeper and a defender tried to deflect the shot away but it spun into the net for the game’s third goal and only 13 minutes on the clock.
Killeshin forwards Cathal Brennan and Eoin Lowry kicked two points, Lowry’s effort deflected over by keeper Wayne Comerford. Colm Begley was winning much possession and set up Jack Deegan for a good point and a minute later Begley himself landed a great point.
Eoin Lowry and Maher exchanged points with five minutes to play before the break. Eoin Buggy saw a simple free drift wide, Begley saw a 45 drop short and Maher saw a shot narrowly miss.
Killeshin survived and instead of narrowing the gap Stradbally conceded two more points from Cathal Brennan and Ross Bolger leaving their team leading 2-8 to 1-4.
The second half was 11 minutes old before either side managed a score, David Aston floating a free between the uprights for Killeshin. Killeshin then introduced Mark McDermott who kicked a point with his first touch.
Midway through the half Tom Shiel kicked an excellent point for Stradbally but trailing by eight they needed goals and the Killeshin defence were in complete control.
Stephen Attride set up the next Killeshin point by Michael Doran and further white flags by Aston and the under-20 star Doran made the scoreboard look very one sided.
Justin Lalor pulled one back for Stradbally and when Brendan Lawlor was hauled down he stood up to take the penalty but the keeper read it well but failed to clear. Shiel caught the rebound, fed Lawlor who made no mistake at the second attempt.
From the kick out Killeshin ran down the field where Stephen Attride raced to the goal line and tap home his side’s third goal. Game well and truly over.