Portlaoise cruise past Ballylinan in first step to retain title 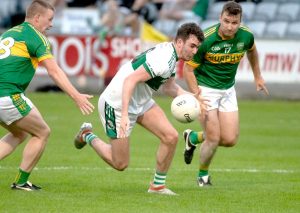 Ronan McEvoy (Portlaoise) finds a hole in the Ballylinan defence in their opening round SFC clash at O’Moore Park on Wednesday Photo: Denis Byrne

THE 2019 senior football championship got up and running on Wednesday even when Portlaoise took the first step in retaining their title with a comfortable victory over Ballylinan.
And they had to do it the hard way having to play over half the game with 14 men after substitute Gary Saunders seemed rather harshly red carded after a collision with Robbie Donoher in the 26th minute.
Despite showing seven changes from the team that started last year’s county final, Portlaoise had the upper hand from the moment Jason Maher placed Conor Boyle for their first score, a goal in the second minute.
Either side of that goal Ballylinan’s main threat, Cathail Dunne posted points. Ronan McEvoy and Ciaran Farrell then swapped points but from there to the end it was all about Portlaoise.
Between that and the half time break Portlaoise shot another nine points, Ronan McEvoy (3), Kieran Lillis, Brian McCormack (2) and Jason Maher (3) all on target.
The best Ballylinan could mange was two from Cathail Dunne and they went onto the break trailing 0-5 to 1-10, and it didn’t get any better on the restart.
Brian McCormack converted a free 90 seconds into the new start and not that there were any doubt as to the eventual outcome of this game, the result was well and truly determined two minutes later when Jason Maher raised a green flag with a great finish.
Ballylinan did keep battling and landed three points from Cathail Dunne, Alan Farrell and Larry Kealy with Brian Mulligan replying for the winners.
But all the while Portlaoise kept tapping away with points from Ronan McEvoy (2), McCormack, Ciaran McEvoy and substitute Craig Rogers and Ricky Maher. The best Ballylinan could do was score three points, two from Cathail Dunne and the third from Cathal Leonard.
It could have been a lot worse for Ballylinan if Portlaoise had not absolutely butchered two late goal chances.
And so Portlaoise are on the road to retaining their title but manager Niall Rigney will no doubt have plenty of aspects that he will want to see his side improve on.