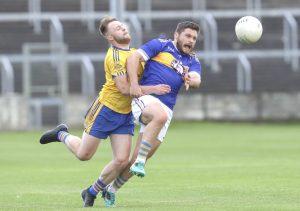 Robbie Kehoe gets this ball away for O’Dempsey’s despite being challenged by St Joseph’s Dylan Doyle in the SFC at O’Moore Park on Saturday Photo: Alf Harvey

TWO goals from Dan McCormack and Johnny Kelly were to provide the impetus for O’Dempsey’s to get this year’s senior football championship campaign off to a successful start. The ten point winning margin was just the start the Killenard wanted in their first step quest to reach a second successive county final.
O’Dempsey’s have dominated the ACFL Division 1 league in recent times and need now to carry that form into the championship. This they did on Saturday evening in O’Moore Park when they had too much in hand for a young St Joseph’s side.
In a closely contested opening half O’Dempsey’s got off to a dream start when with less than three minutes played Mark Barry passed the ball across the square to his Laois teammate Dan McCormack who palmed to the net.
St Joseph’s responded well with veteran Noel Garvan and Josh Lacey landing points. These were cancelled out by points from Micheál Finlay and Mark Barry. Barry’s score might well have been O’Dempsey’s second three-pointer but he blazed over when one-on-one with the keeper.
St Joseph’s Conor Kealy kicked a nice soon after but Matthew Finlay relied in kind from a free at the end of the first quarter. A well taken brace from Dylan Doyle cut the deficit to the minimum five minutes later.
Matthew Finlay added his second free before Barry Kelly also added a point to push O’Dempsey’s three clear. St Joseph’s got a boost when corner-back Aidan Brennan burst up field and scored a stunning point with the outside of his right boot.
McCormack added a point for O’Dempsey’s but St Joseph’s reacted with points Doyle and Josh Lacey to leave just a point between the sides with four minutes to to half time. Matthew Finlay scored the last point of the half to leave O’Dempsey’s leading 1-7 to 0-8.
That two point gap became three inside 30 seconds of the restart thanks to Matthew Finlay.
The game was effectively killed off less than a minute later after McCormack turned provider passing the ball to Johnny Kelly who placed it beyond Aaron Cooney for O’Dempsey’s second goal.
Micheál Finlay extended O’Dempsey’s lead before James Kelly got St Joseph’s first point of the new half from a free at the end of the third quarter. Amazingly the Kellyville outfit would score only two more points in the final quarter.
O’Dempsey’s were reduced to 14 men after Robbie Kehoe picked up a second yellow card but continued to dominate proceedings with points from points from Matthew and Micheál Finlay, Mark Barry and Barry Kelly while St Joseph’s only response was two more points from Dylan Doyle.

The final point was scored by Barry Kelly as O’Dempsey’s ran out comfortable winners and a round two meeting with Graiguecullen.