Portarlington comfortably brush aside The Heath 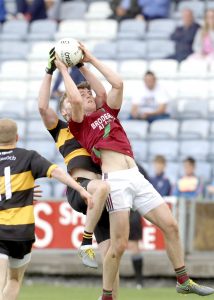 Sean Byrne wins this ball for Portarlington against The Heath’s Denis Booth during their SFC meeting at O’Moore Park on Saturday Photo: Alf Harvey

PORTARLINGTON, one of the favourites to unseat Portlaoise as county championships, took the first step towards achieving that goal with an effortless victory over The Heath on Saturday. Tormentor in chief was Colm Murphy who scored a very impressive 11 points and just four of those coming from frees.
The winning 12-point margin should really have been greater with Portarlington wasting a number of good chances and being denied a number of times by The Heath goalkeeper Joe Walsh.
Portarlington dominated possession for large periods and recorded the first score through Jake Foster two minutes in. Colm Murphy doubled their lead with a free himself before Foster added his second with an excellent effort while under pressure.
The Heath got off the mark through Chris Bergin before he swapped frees with Foster leaving Portarlington two ahead.
Murphy was again on target but Portarlington should have had a goal after a great move placed Paddy O’Sullivan in on goal but he shot badly wide.
Murphy pointed again while Foster and Bergin traded points with ten minutes of the half remaining.
For once The Heath enjoyed some parity ad finished the half well with points from Andrew Booth and Bergin, but Murphy scoring the final point of the half Portarlington went into the break leading 0-8 to 0-5.
Substitute Jason Moore opened Portarlington’s scoring in the second half but they were to be tormented by The Heath goalkeeper Joe Walshe after this.
Murphy and Foster combined to try and get a goal but Walshe somehow cleared the ball off the line.
Portarlington were handed another goal opportunity when referee Maurice Deegan awarded a penalty. Jake Foster saw a shot brilliantly saved by Walshe and was illegally challenged as he attempted to get to the rebound. The opposing goalkeepers faced off for the resulting penalty when Portarlington’s Scott Osborne was denied by Walshe.
Points followed for Portarlington via Murphy (2) and Stephen O’Neill before The Heath got their first score of the second half in the 48th minute with a Chris Bergin free.
Portarlington added four more points through Murphy (2), Ronan Coffey and Foster before The Heath would score their second point and final point of the game five minutes from time again from Bergin.
Portarlington finished off with three more points from Murphy giving them a second round meeting with against the winners of Ballyroan Abbey and Emo.