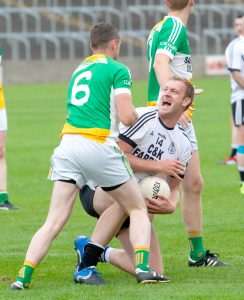 THIS game turned into something of a personal battle between Laois’s two ace forwards, Donie Kingston and Evan O’Carroll. In the end the Arles Killeen man edged the personal battle by a single point while his side held off a determined Crettyard fight back to win by two points.
The reward for winning sees Arles Killeen paired with Killeshin in round two but they will have to do so without goalkeeper Mick Leigh who was red carded late in the game.
O’Carroll landed the game’s first two points, the first from play before the clock had reached 20 seconds. The second, from play, wasn’t to come for another seven minutes.
Kingston eventually got Arles Killeen off the mark with a fantastic point from out wide on the right in the eighth minute and added another a minute later ad in between Brendan O’Shea scored a good point.
The eventual winners were now in front and amazingly would never again be headed. O’Carroll did level affairs in the 11th minute but there was an instant reply from Arles Killeen when Kingston got a fist to Conor Keightley’s delivery and direct it to the net and then add a point for good measure.
Points from Cormac Murphy and O’Carroll kept Crettyard in touch but a brace from Kingston left Arles Killeen leading 1-6 to 0-5 at half time.
The restart saw Arles Killeen pile on the pressure but shooting some bad wides. They had two good goal chances, the first saw Ian Scully denied by Crettyard keeper Matthew Kelly, the second a Kingston rasper that was off target.
O’Carroll kept Crettyard in touch with two points but Arles Killeen were to get totally on top in the third quarter. Between the 37th and 44th minute they were to score five answered point, Kingston with three frees and one apiece from play from Scully and Brendan O’Shea.
With Jason Enright cancelling out a good effort by Patrick Brennan Arles Killeen had a healthy seven point lead with ten minutes remaining.
But that all changed in a flash. A long ball from Cormac Phelan looked to be going no where until O’Carroll brilliantly gathered it, spun and drove it to the bottom corner.
This score gave Crettyard new confidence while Arles Killeen looked vulnerable. And it got even better for the Kilkenny border club when their pressure resulted in O’Carroll converting two frees to leave jus two between them with 55 minutes on the clock.
After the second of those frees O’Carroll was left sprawling on the ground and in crazy circumstances Mick Leigh tried to drag him to his feet and was immediately shown a red card by referee Brendan McCann. In some ways this break in play benefitted the winners as it broke Crettyard’s momentum.
Kingston restored Killeen’s three point lead from play but still Crettyard came back at them. But for once that evening O’Carroll’s boot let him down when two good opportunities from frees failed to find the target.
The last score did come from Crettyard but Patrick Brennan’s rasping shot went over instead of under the cross bar.