Scoreline flatters Graiguecullen but they won’t be worried 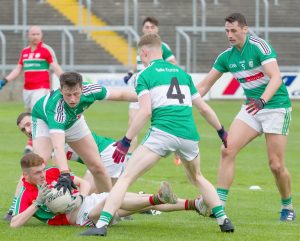 Graiguecullens Ross Hennessy finds himself under a bit of pressure from Ballyfin players Photo: Luke Wynne

THIS scoreline masks what was a pretty ordinary performance by Graiguecullen. Given they won by 10 points it is hard to believe that the sides were tied at the start of the fourth quarter and the winners held a one point lead with ten minutes to play.
But when the ball fell to Danny Doogue in the 56th minute the veteran forward rattled the net and it was effectively game over.
Graiguecullen got the scoring off to a bit of a flurry landing two points inside the opening three minutes. A Jamie Parr free got the scoreboard ticking before Ross Hennessy landed number two from play. But we had to wait another six minutes before Graiguecullen keeper Danny Bolger converted a 45.
It was all Graiguecullen at this stage but Ballyfin got a foothold when Darragh Connolly placed James Moore for a well take point. An excellent point from James Moore closed the gap to the minimum 11 minutes in but it too over six for the next score, an equalising point from Allan Connolly.
Ballyfin were now controlling the game although it was all very pedestrian. Against the run of play Luke Alsybury edged Graiguecullen back in front in the 24th minute but A Sean Moore free had the sides together almost immediately.
Jack Priestly and Ian Fleming swapped points as the half drew to a close but an injury point from Sean Moore saw Ballyfin lead by 0-6 to 0-5 after a mundane first half.
A super end to end move ended by Darragh Connolly splitting the posts was the first score of the new half, four minutes after the restart. Either side of that point Graiguecullen shot four bad wides but eventually found the target with a 41st minute Parr free and the same player was on target again five minutes later.
Graiguecullen went ahead in the 50th minute when another Parr free was deemed to have gone wide by everyone in O’Moore Park apart from the officials.
Then came Doogue’s goal and soon followed by another from Aaron Forbes when keeper Robert Foran failed to control a long ball and the full forward was left with a simple palm to the net.
In between these Trevor Collins landed appoint and with Parr converting two more frees Graiguecullen were into the winners’ pot for the round two draw.
Ballyfin will be disappointed with the margin of the defeat but when you score only a single point in the second half it is hard see out a victory.