Centra stores rewarded for excellence in food safety and hygiene

EMPLOYEES at five Centra outlets in Laois were celebrating last week after their stores were recognised for excellence in hygiene and food safety.

Daniels’ Centra in Portarlington and Dunne’s Centra in Ballylinan received Q Mark for Hygiene and Food Safety Level 3 Emerald awards at a special ceremony in the Great Southern Hotel, Killarney.

The accolade exemplary standards of cleanliness and hygiene. Both stores achieved a score of between 75% and 100% in an independent assessment. 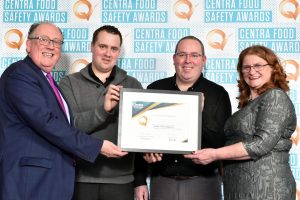 Three other Centra stores in Laois – Martyn’s of Mountrath; Downey’s Dublin Road, Portlaoise; and McSorley’s, Mountmellick Road, Portlaoise were recognised for their commitment to health and safety within the Irish food sector, scoring between 60% and 74%. They were presented with the Q Mark for Hygiene and Food Safety Level 2 Sapphire award.

Speaking at the awards ceremony, Centra Ireland’s managing director Martin Kelleher said: “It’s fantastic to see such a huge number of stores represented here and even more terrific to see so many bestowed with awards. These well-deserved awards have been presented as a direct result of their constant commitment to ensuring their food service meets and exceeds the incredibly high standards laid out by Excellence Ireland.”

Soraid McEntee from the Excellence Ireland Quality Association said: “We have seen a huge improvement in the standard of food safety in Ireland over the last number of years and during this awards process, we have observed serious commitment to maintaining the highest levels of excellence in quality control by these award-winning stores.”