Laois cruise past the Royals to complete the championship double

ST Laurence’s GAA complex was the venue on Sunday morning for the clash of the Royal County and the O’Moores in the Leinster minor ‘B’ final. It must have been unusual for the Meath girls for not alone were the facing Laois but were also playing the reigning All-Ireland champions.
In a roundabout way the All-Ireland must be out of the way before a ball is pucked in the provincial championship. This of course is a huge advantage for the team that has a decent run in the All-Ireland series and not alone did Laois have an excellent run they contested the final and stormed back in the second half to force a draw. If many thought they missed the boat well they turned up the second day to turn in an even greater performance and bring home the spoils.
On Sunday they were raging hot favourites and welcomed back the excellent Aimee Collier who missed the All-Ireland series owing to cruciate injury apart from a short cameo in the goal for the replay. On Sunday she made her full debut and, although not back to full fitness, she was very influential.
Laois had brushed aside Carlow and Westmeath scoring a total of 9-28 in two outings. Meath were very strong two years ago at under-16 but on Sunday from the throw in the Laois girls were totally in control. The weather then was warm sunshine but Laois picked off points by Andrea Scully, Kirsten Keenan and a brace from Lucy O’Connor all within five minutes of the throw in.
Meath opened their account with a point from Ciara Foley but three minutes later St Brigid’s girl 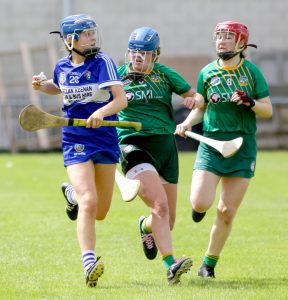 Alannah Tynan pounced for the game’s opening goal after a great passing movement. From the puck out she returned the ball between the uprights.
The game was getting robust and the excellent Molly O’Connor picked up a harsh yellow card but deservedly later picked up the player of the match award.
Meath were improving and full forward Ciara Foley added her second point from a free but Clodagh Tynan replied with a similar score from a 45 after 20 minutes.
The Royals now struck a brace of points by Anna Shiels and Ellen O’Hara as they were finding gaps in the Laois defence but Laois rose to the challenge in style. Shona Jones lofted a great point from the side line and three minutes before the break a great passing movement from defence saw Lucy O’Connor send a rocket like shot into the roof of the Royal net. She then grabbed the puck out and fired over a point.
Meath then cut open the Laois defence but a powerful shot from Ciara Foley was brilliantly saved by Aedin Lowry leaving the half time score 2-10 to 0-5 in favour of the All-Ireland champions.
Laois mentors were pleased with their charges and although they knew their work was done they encouraged the players to continue in the same vein. They hit the first four points on the resumption, the pick of which was an effort by Alice Walsh. After Meath replied with a point by Andrea McBride Laois delivered the killer blow.
Defender Molly O’Connor landed a great ball into Alanna Tynan who caught the rebound off the upright. She fed a perfect pass into full-forward Kirsten Keenan and from close range she made no mistake.
Laois then added three points in quick succession before Ciara Foley responded for the Royals but the scoreboard read 3-16 to 0-7 entering the final quarter.
Laois then emptied the bench and between injuries, substitutions neither team recorded a score until Meath struck two points from play as the game petered to its inevitable ending. Long before the long whistle sounded Laois had completed a exclusive double and were All-Ireland and Leinster champions.
After the game the Harps player Alice Walsh was presented with the winning trophy amid scenes of great celebration. Two years ago this team were crowned All-Ireland champions after a replay and certainly will play a big part in Laois’s bid for Leinster and All-Ireland honours at adult level down the line.