Laois girls too strong for neighbours 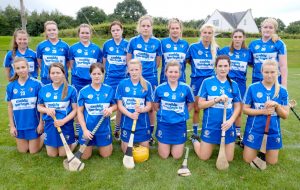 The Laois team who played Carlow in the All Ireland Intermediate Camogie championship at Netwatch Carlow Training Centre in Fenagh on Saturday Photo: michaelorourkephotography.ie

YOU have to give a lot of credit to the players on both teams who played in what was a dead rubber of the camogie All-Ireland intermediate hurling championship tie at the Carlow Training Centre on Saturday. From the group Wexford have been relegated and irrespective of the result here both teams are safe for next year and cannot progress any further this season.
Both teams struggled to get 15 players on the pitch but those that did line out put in a hugely commendable performance showing they were honoured to pull on the county jersey.
You could argue the fixture should never have been fixed for the Bank Holiday August Weekend but this match had been set in stone for many months now. There was a sense of apathy to the whole affair. Spectators numbered a few family members in support of their own.
On the pitch the players didn’t let the lack of atmosphere and support discourage them. Eleanor Tracey flighted over an early free to give Carlow a lead and Mary Keating replied in kind for the visitors. It was tight in the opening quarter. 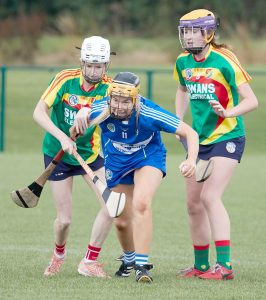 Amy Loughman nudged Laois ahead but Emma Coogan hit back for Carlow with a lovely point from play. Playing with the wind Laois got a run on the home side and with five minutes to the interval led 0-6 to 0-2. Carlow rallied and Tracey pointed from play and followed up with a free.
A minute before the break Eibhe Lawler, despite shipping a heavy tackle, slipped the sliotar over the bar to finish the first half scoring. Having played with that breeze Laois only led 0-6 to 0-4 at the break. They looked to be in trouble while Carlow had good reason to be optimistic.
Yet it was the visitors who started the second half best. Keating landed two points. Twice in the third quarter the O’Moore girls led by five points with Donna Mortimer also scoring a couple of points in a row.
Eventually Carlow got moving. Tracey landed three points and Lawler also pointed. That left only two between them.
It was as near as Carlow got to their opponents after that. Keating and Loughman both found the posts when scores were needed. With time running out Laois embellished a fine win with a goal apiece from the same duo.
Just on the whistle Alison McEvoy went for goal from a 20m free for the visitors but the Carlow defence blocked her effort. That would have been tough on the hosts. They were never eight points the inferior side never mind 11, though Laois were the superior side.