A SIX-YEAR-OLD BOY, who has been described by his devoted family as ‘a little warrior’ has lost his battle with leukaemia.

Shane Brophy from 15 Cois na hAbhainn, Green Mill Lane, Portlaoise and Doonane Road, Grettyard died peacefully at his home surrounded by his family on Monday 29 July after a brave battle with cancer. 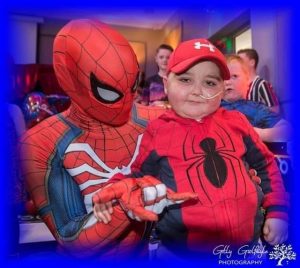 Speaking to the Laois Nationalist, a sister-in-law of Shane’s mother Elaine described him as ‘a little warrior.’

“He was a happy little boy, who was always up to divilment. We will miss him terribly,” she said.

Shane, who touched the hearts of all those who were lucky to have met him during his short life, was diagnosed with a terminal illness on 1 October 2106. Since his diagnosis, he took his illness and the gruelling schedule of treatments in his stride and always with a smile on his face.

A testament to Shane’s popularity was proven when bikers from around the country converged in Portlaoise on Sunday 7 July to help make his dream of riding on a motorbike come true. This was followed by a surprise early birthday party, which was organised by his family in the Midland Park Hotel. Shane got another wish when he celebrated his sixth birthday on 19 July.

Adding to his wish list, the following week a convoy of trucks rolled into town and took Shane on a road trip through the streets of Portlaoise, culminating at Treacy’s The Heath.

Shane will be missed by his mother Elaine (‘Ma’), his brother Scott (7), sister Leyla (2), his grandparents, aunts, uncles, cousins and a large circle of friends.