Clock is ticking on ‘quad squad’

LAOIS will welcome miracle quadruplets in the coming weeks, as a delighted couple prepare for the births of three girls and a boy.

Mountrath residents Shane Magee and his fiancée Ciara Flynn, who both work in Portlaoise, are over the moon with the imminent arrival of their four babies.

Ciara is just over 28 weeks’ pregnant and the babies will be delivered by caesarean section at 32 weeks, as is normal with quadruplets. The premature newborns, each currently weighing about two pounds, will have to spend time in the Neonatal Intensive Care Unit (NICU) at the Coombe Hospital, Dublin before they can go home.

It is an exciting yet daunting time for the couple, who moved to Mountrath earlier this year. Shane is a social care worker in Portlaoise, while Ciara (34) is an accounts manager on maternity leave from her job in Portlaoise. 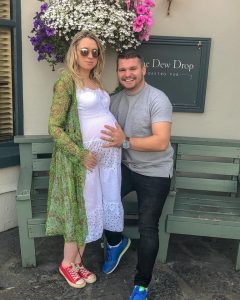 Mountrath-based couple Ciara Flynn and Shane Magee, as they await the birth of quadruplets

The couple met three years ago and dearly wanted a family but were unable to conceive, as Ciara suffers from polycystic ovaries. They decided to try follicle stimulating hormone (FSH) injections at Tallaght Hospital and now delightedly joke that the injections ‘worked too well,’ as subsequent scans amazingly revealed four heartbeats.

Ciara says: “We were speechless for a little bit, but it was an exciting shock. I asked my doctor if she thinks there’s anyone else in Ireland pregnant with quads right now and she doesn’t think so.”

Originally from Naas, Co Kildare, Ciara says she has had a great pregnancy and feels very healthy, as she prepares for the four births at the Coombe Hospital. Each baby will have a medical team headed by a specialist consultant and will be brought to the NICU immediately for expert care. If all goes according to plan, Ciara and Dublin native Shane hope to bring their little family home to Mountrath within weeks of delivery.

As they face huge expenses with four babies, the couple has set up a ‘GoFundMe’ page to help them purchase essentials. They said: “So many people assume that you get a lot of support from the government, council or big brand names, all of whom we have contacted and, unfortunately, this is definitely not the case at all. We would absolutely love the support of all family, friends and anyone reading this in helping towards our four tiny miracle babies. We would be eternally grateful.”

Ciara and Shane have also set up an Instagram account and a Facebook page called ‘Magee Irish Quad Squad’ as they begin the final countdown in their extraordinary journey.