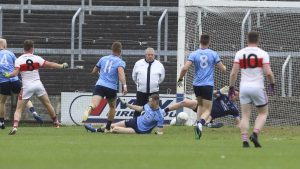 EMO and Ballyroan Abbey will go at it again as a late Nigel Murphy goal ensured a replay would be needed to separate these two sides when they met in O’Moore Park on Tuesday evening.
Emo got their senior championship off to the best possible start as a high ball kicked in by Murphy hung up in the air and Murphy followed the ball in to smash it into the roof of the net.
Andrew Bonham then pulled off two fantastic saves, the first coming from a Darren Strong effort with Murphy being denied his second goal by Bonham’s legs. Paul Lawlor then tapped over a free.
Ballyroan’s Cian Moffitt had a clear-cut chance on goal, but his effort was well saved by Laois under-20 panellist Niall Gorman. Lawlor then scored a wonderful point as Ballyroan still hadn’t got on the scoreboard. Laois under-20-star Jack Owens raised another white flag as Emo looked to be well in control.
Another under-20 star, this time the captain, Diarmuid Whelan got Ballyroan Abbey’s first score after 13 minutes before Shaun Murphy followed suit and put the ball over the black spot.
Whelan scored a wonderful point to cut the gap to three as Ballyroan Abbey began to get a foothold in the game. Padraig McMahon pointed a marvellous score from the left which curled between the posts and soon added another. Darren Strong got Emo back on the scoreboard after Ballyroan Abbey had scored five without reply. A Shane Murphy point and a super score from Rorie Meredith extended Emo’s lead before McMahon got another before the break to leave his team down by three points at the break.
Lawlor got the second half’s scoring underway from a placed ball. MJ Tierney also converted a free to bring the gap to three again. Lawlor was at it again as he curled over a stunning score before Owens got his second point courtesy of a free.
Ballyroan Abbey got the goal they needed after a sublime pass by Scott Conroy allowed McMahon to fist to the net. The lead was now down to two.
Ballyroan Abbey levelled the game thanks to scores from McMahon and a Tierney free. Ballyroan Abbey then went ahead for the first time after Conroy pointed. Stephen Norton got his first of the game after a fine score to level the game again.
The game was beginning to go score for and score and Whelan pointed twice to give his side a slender lead.
Ballyroan Abbey almost secured the victory only for the foot of Niall Gorman to deny a point-blank Tierney effort. Whelan then tapped over to leave three between the sides.
Emo were to have one more chance and they duly obliged as Murphy scored a goal to force a replay and send the Emo contingent into ecstasy.