Rathdowney/Errill coast to victory in the rain 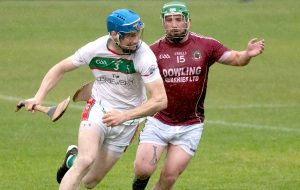 THESE two teams must have wondered what they did wrong to get the weather they got in O’Moore Park after seeing all the other senior games played in brilliant August weather. Having had a bad experiences in their last appearance here both must have thought they were being punished again.
Rathdowney/Errill left very annoyed after last year’s final while Ballinakill left disappointed after they lost to the same opposition in the semi-final.
Rathdowney/Errill were warm favourites on Sunday evening to claim victory and without even playing to their potential they raced into an early lead with points at ease. Mark Kavanagh, Jack Kelly and Paddy Purcell had great practice shooting points for Laois and looked like they could score whenever they wished.
This scoring exhibition continued as Ballinakill began to find their target but to a much lesser extent. Cha Dwyer and Eamon Jackman fired over a brace but then Rathdowney/Errill upped their challenge and Ballinakill were more intent on preventing scores than getting them.
At the interval at least the rain had ceased while last year’s beaten finalists comfortably led 0-16 to 0-4 at the half way mark.
The second half saw Ballinakill show more appetite but getting past the Rathdowney/Errill half back line was a major obstacle with Jack Kelly spraying balls all over the pitch. Mark Kavanagh kept spraying the rain drops at the back of the Town goal as he converted frees at will.
Ballinakill battled hard but when they did get a sight of the goal more often than not they missed the target.
Rathdowney/Errill then put the cap on a comfortable performance with a great move that was completed by Pat Purcell now operating around the square. He fed the well placed Ross King and he gave the keeper no chance.
After that they might have given some of their experienced players a break but there was the little matter of an intermediate clash with Clonad 24 hours later. That coupled with the juniors progressing earlier in the day meant their options were limited. Unless manager John Delaney himself rolled back the years there was nobody left.
Ballinakill won a close in free in the dying minutes. Cha Dwyer attempted a goal but the defence were equal to the attempt and it summed up a miserable evening for last years semi-finalists.
Ballinakill manager, former Kilkenny defender Michael Kavanagh, with seven All-Ireland and ten Leinster medals, must now realise the task that lies ahead but he would have been impressed with the opposition. He will be hoping there will be easier games to come beginning with Portlaoise.
Rathdowney/Errill boss John Delaney will know that all games will not be as comfortable and next time out they face Castletown who breezed past Portlaoise in their opening game.
Referee George Boyhan was making his senior championship debut and it was going to be difficult for him but he did well and as regards the hand passing he used common sense. There will be times when referees get this one wrong but 50-50 is not bad.