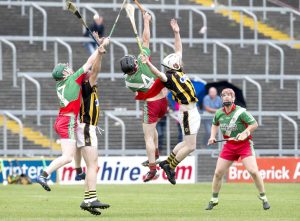 All up together between Borris/Kilcotton and Camross in the SHC at O’Moore Park on Saturday evening Photo: Alf Harvey

TAKE nothing away from this win for Borris/Kilcotton. They thoroughly deserved it and were entitled to feel just that little bit self-satisfied with a job well done at the final whistle.
Since the coming together of Borris-in-Ossory and Kilcotton a decade or so ago the amalgamation has never recorded a championship win against their Saturday evening opponents. They have met four times in the championship suffering defeat in the 2017 and last year’s semi-finals and the county final in 2013.
Mind you, while disappointed at the loss Camross will by no means be too downhearted. With games against Clough/Ballacolla and Abbeyleix to look forward to they know that just one win will see them advance from their group.
Over the past few years Camross have highlighted the anomaly in the present championship set up. Last year Camross became the first team to retain the title since Castletown in 2003. They did so after also losing to Castletown Gaels in their first game and 12 months prior they lost their second game, and in both years went on to claim the title.
Playing with the aid of a strong wind in the first half Borris/Kilcotton made the best use of it to go in at half time with a six point advantage, and that thanks in the main to goals from PJ Scully and Aaron Dunphy.
Early pints were swapped between Niall Holmes (free) and Joe Camion and it took until the 11th minute for the next score to come, a point from Dean Delaney.
Minutes later little looked on when Aaron Dunphy cut in along the end line and find the Camross net from an acute angle. A long range point from Scully had Borris/Kilcotton four points to the good at the end of the opening quarter.
The trend continued as Scull converted another free in the 20th minute and inside a minute came Borris/Kilcotton’s goal. This time Dunphy turned provider laying off to Scully who made no mistake.
Points from Holmes (free) and Eoin Gaughan settled Camross nerves only to see Neil Foyle split the posts from out close to the wing.
Dunphy came within inches of raising a second yellow flag but some Andrew Mortimer cleared the sliotar off the line for a 65 which Scully converted.
Points by Dean Delaney from play a Holmes with a free kept Camross in touch as they sides went into the break leading 2-6 to 0-6.
Another Scully point put seven between the sides before a brace of Holmes’ frees were matched by Scully and Colm Stapleton entering the final quarter.
Then came what will surely one of the most extraordinary scores of the championship when Camross goalkeeper Thomas Dunphy let fire from inside his own square and with one bounce the sliotar sailed between the Borris/Kilcotton uprights. And when Lorcan Burke pointed the gap was reduced to five points with eight minutes remaining.
Scully and Gaughan swap points while Mossy Burke leaves the difference at four with time almost up. With the announcement of three minutes of time added on the pressure is now on Borris/Kilcotton.
And it increases when Scully misses a free and Ciaran Collier’s point leaves just a goal in it.
But time ran out for Camross and Borris/Kilcotton could celebrate a momentous victory.