Whale of a time at scarecrow festival

DURROW truly had a whale of a time, as a magnificent sea creature scaled the crest of a wave to take top prize at the celebrated Scarecrow Festival.

The beleaguered blue whale, its mechanical mouth choked by plastic waste, joined tree huggers and buzzing bees in the timely tableau Save Our Bees, Hug Our Trees Clean Our Seas,’ which deservedly won the overall award in the 2019 competition.

The ingeniously assembled winner from Dove House, Abbeyleix was a huge hit with judges and visitors, as it combined colourful creativity with a potent message about the urgency of protecting the environment. 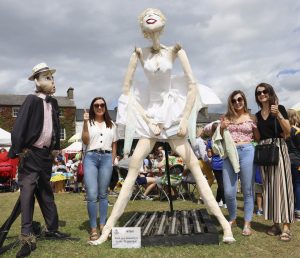 The Scarecrow Festival committee said: “We all know the importance of the great pollinators that are bees, the need to protect our trees and the plight faced by so many species that live in our plastic-polluted seas. This year’s winner cleverly combined and highlighted all three issues in such a unique, fun and educational way.”

The committee added that judging was particularly tough this year, as “absolutely brilliant talent, thought and creativity” went into every single entry. They said: “The entries never cease to amuse and amaze. They get better and better, year-after-year.”

As always, the nine-day festival attracted noted and often notorious celebrities and politicians from across the world.

New UK prime minister Boris Johnson chose Durrow for his first official Irish engagement, Vladimir Putin took up residence in Mary Street and Donald Trump was everywhere. There were moon landings, a couch filled with the cast of Friends (‘I’ll bale hay for you …’), a world championship bout between Katie Taylor and Delfine Persoon and a side-splitting Fawlty’s Bar beside the Durrow Inn. Simba the Lion King visited the small green and The Beatles appeared on that famous zebra crossing as they traversed the Abbey(leix) Road.

Meanwhile, the Scarecrow Festival was the last straw for ill-fated swinging TD Maria ‘Bale-y,’ who swung precariously from a tree near the bridge and made another appearance in Mary Street, as visitors received ominous warnings that ‘unsupervised swinging’ was forbidden throughout the festival.

One thing’s for sure: if imagination were a currency, the people of Durrow would be millionaires.