MOUNTMELLICK is looking to the future with the launch of a high-tech hub in the heart of the town.

The Webmill digital hub, which was officially opened by justice minister Charlie Flanagan last week, has a bright coworking space with 44 ‘hot desks’ that will help people to work locally rather than commute. 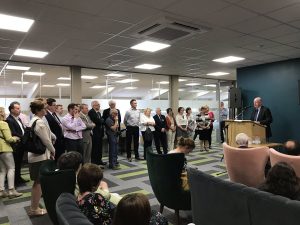 Justice minister Charlie Flanagan highlights the importance of “bringing jobs to people, rather than people to jobs”, as he officially opens the Webmill digital hub at MDA Mountmellick

Cutting the ribbon on the new centre in Irishtown on Tuesday 30 July, minister Flanagan said that the venture promised a better quality of life for many Laois commuters and he congratulated MDA manager Paddy Buggy and everyone involved in the ambitious project.

The 21st century hub pays homage to the area’s rich enterprising past with a unit called the Beale Centre, which is named after the Quaker family that employed almost 2,000 people in Mountmellick in the early 19th century.

The Beale Centre aims to be a focal point for start-ups and established businesses throughout Laois with access to a wide range of supports, services and third-level institutions, including Enterprise Ireland, NUI Maynooth, Athlone IT, the IDA and Laois Partnership Company.

The Mountmellick Webmill was developed with the help of Town and Village Renewal funding, Bank of Ireland, Laois Enterprise Office (LEO) and Laois Co Council (LCC). Workers also have access to a wide variety of MDA facilities that include free parking, an on-campus restaurant, a crèche, river walks and a community park.