All-Ireland Camogie Under-16 ‘B’ Championship s/f 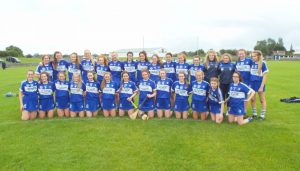 A WEEK after the minors won the Leinster title having defeated Limerick, the Laois under-16 team headed for McDonagh Park in Nenagh on Sunday last in search of a place in the All-Ireland final.
Although rank outsiders the Laois girls made a gallant bid that just came up short. This was a wonderful display by the O’Moore girls and from the throw in they had the girls from the banks of the Shannon on the back foot.
After a closely contested opening seven minutes in which neither side could find the target, in fact there was seven stoppages between line balls, frees and wides. Laois eventually went in front after Grainne Delaney set up Lucy O’Connor for a point. Two minutes later Andrea Scully opened her account and she went on to torment the girls in green for the remainder of the game.
Fifteen minutes in, after more stoppages, Andrea Scully went on a solo run before splitting the posts. Limerick piled on the pressure but the Laois defence just soaked up anything that was thrown in their direction.
With 18 minutes on the clock another solo run by Andrea Scully and she made it four points to nothing and in the 21st minute she made it 5-0 after another mazy solo run down field.
Limerick were slowly finding their feet and a great solo run by Ella Hession yielded their opening point. Now that they had found a way past the Laois defence they began to hunt in packs but Laois defended stoutly until the last minute of the half when full forward Megan Walsh pulled hard along the ground and the ball hit the net. This was a massive score and coming as it did on the half time break it gave the Limerick girls momentum.
Within a minute of the restart the sides were level, midfielder Nadine White pointing a free but Limerick then hit a couple of bad wides. However, they were now dominating around midfield and went in front for the first time when White converted a free from 40 metres out in the 39th minute.
Ella Hession pointed from play but Andrea Scully pulled one back from play and after Laois began to find their rhythm again the Camross girl fired over the equaliser in the 46th minute.
The stage was set for a thrilling final quarter and Laois made a few changes that helped them, but for once Andrea Scully saw a free drift inches wide. Limerick went back in front eight minutes from time when Ella Hession from Monaleen, who was excellent all through, from the puck out she returned the ball between the sticks.
Limerick then struck two bad wides but five minutes from time they seemed to have struck a killer blow when centre forward Sinead Barry connected with a ground shot that beat the Laois keeper and now the margin was five with five minutes remaining.
Laois had not gone away and from the puck out Andrea Scully went on a solo run but was fouled. Having picked up a hand injury she still stood over the free and somehow squeezed the ball inside the keeper’s left hand post. Game back on.
Time was not on Laois’s side but midfielder Grainne Delaney caught the puck out and returned the sliotar between the uprights to leave the minimum separating the sides.
Could Laois find another and the Laois followers were ecstatic when the same Grainne caught the puck out and the white flag was waving again.
Laois went on the attack again but Limerick cut out the danger and landed a high ball around the Laois square where a defender and a forward clashed, the ball flew up and the umpire indicated a 45. Debatable because it was a clash ball but the Limerick midfielder Nadine White stood over the 45 and spilt the posts.
The referee blew the long whistle before the puck out landed in midfield.
After a dramatic last five minutes this was heartbreak for the Laois girls but such is sport.
There was one other hugely controversial decision ten minutes from time. Laois were in possession but the referee halted play for medical attention to Andrea Scully. Instead of awarding Laois an indirect free he resumed play by throwing in the ball which led to Ella Hession scoring a vital point.
Narrow margins but Laois management can be extremely proud of their work and while the girls were bitterly disappointed they lost nothing in defeat and they will be a force for the future.