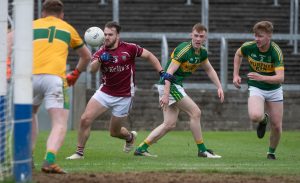 ARLES Kilcruise and Ballylinan will have to do it all over again after a 70th minute Ross Munnelly penalty meant the sides were level at the final whistle. This was a most unlikely outcome as Ballylinan were the dominant side in the second half and looked set for a quarter-final place holding a two-point lead when Kilcruise were awarded the penalty.
Munnelly had started the game in rampant fashion scoring 1-1 in the first three minutes. Brendan Conway provided for the goal after a pass across the goal. Andy McEvoy got Ballylinan on the scoreboard with a free before Munnelly tapped over a free.
Alan Farrell then teed up Laois under-20-star Seamus Lacey to fire to the back of the Kilcruise net. However, Caomhan Brennan and a Chris Conway free had Arles Kilcruise up by three midway through the first half.
Andy McEvoy and Ross Munnelly traded points before Ballylinan scored 1-2 without reply. Robbie Donoher and Cathail Dunne raised white flags while Andy McEvoy finished superbly beyond Ciaran Lawlor. And they levelled the game coming up to half time when David Conway pointed after a great run before Ross Munnelly fired over once again.
Ballylinan reacted positively scoring another 1-1 without reply; Ciaran Farrell tapped over before Dunne raised the green flag for the third time in the first half. Ross Munnelly took his tally to 1-6 and this left three between the sides at the break in favour of Ballylinan.
Ciaran Farrell got the first score of the second half before a barren spell was lifted with two points from Alan Farrell and Ciaran Farrell (free). Arles Kilcruise responded with intent and scored four points in a row to put them within two of their opponents.
PJ Lawlor got his only score of the game before Ross Munnelly split the posts with a free while Kevin Meaney and David Conway added the other two points. Ballylinan substitute Larry Kealy fired over after a short free to leave three points between them approaching the 60 minute mark.
The referee had signalled three minutes of additional time, but after an altercation between a few players, the game crept towards the 70th minute mark. Donoher had been black carded for a foul on Ross Munnelly on the 14 metre line.
Munnelly had to go for goal and as he struck the ball the referee signalled for a penalty for encroachment which Munnelly blasted the ball into the net to end the game.
Both these teams will have to do it all again on Thursday evening in O’Moore Park at 8pm.