Portlaoise march on in their search for three-in-a-row 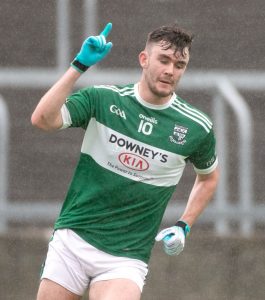 PORTLAOISE are through to the senior football championship quarter-final after they were made to work hard for victory over last year’s intermediate champions, Courtwood in O’Moore Park on Saturday. Portlaoise can now take a break while they wait on their quarter-final opponents.
Jason Maher got the game’s first score from a placed ball before Matthew Kelly settled any early nerves for his Courtwood side. Portlaoise showed why they’re chasing for a third title-in-a-row as they reeled off five scores without reply. Maher fired over another free before veteran Bruno McCormack got on the score sheet. A star for the future Damon Larkin got his first score of the championship before Bruno got his second of the game. Ronan McEvoy, who scored six points in round one opened his tally for the evening.
Courtwood finally got some momentum going as Danny Luttrell converted a free before Alan Kinsella raised a white flag. Sharp shooter Paul Cahillane opened up his own tally for the evening with two points, one from a free.
Luttrell scored a 45 and Luke Doran pointed as closed the gap to three points coming up to half time. Bruno scored his third and last score of the half as Portlaoise went into the break four points up.
Portlaoise got the first score of the second half as a strong run by Larkin allowed him to tee up Gareth Dillon to fire over. Midfielder Kieran Lillis then got his name on the score sheet after a fine score off his left boot.
Cahillane then had a huge goal chance, but the former Celtic striker couldn’t keep the ball down and fired over for his third point of the game. Cahillane was at it again as he curled a beautiful effort over with his left foot.
Courtwood were on the ropes but a free from Doran reignited their spark as they raised a green flag. Laois under-20 star Niall Dunne turned his marker and fired low into the corner beyond the reach of Michael Nolan in the Portlaoise goal.
A mazy run by half-back Colm Wilson left three between the sides as the crowd began to wonder if the unimaginable would happen. Courtwood were attacking with real threat, but Portlaoise were withstanding all the pressure.
Portlaoise then launched a counter attack and scored the game ending goal when McEvoy unleashed a venomous strike from the 21 metre line which left Matthew Byron with no chance in the Courtwood goal.
Portlaoise will now wait on their quarter-final opponents while Courtwood advance to round 3 three to play a qualifier’s winner.