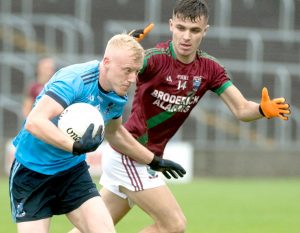 PORTARLINGTON substitute Adam Ryan scored possibly the most vital point of his career than he did in the 78th minute of this cracking round two game in O’Moore Park on Saturday evening.
In an incident packed game Portarlington coughed up a four point advantage in the space of ten minutes having totally controlled the second half, Padraig McMahon’s goal edging Ballyroan Abbey back in front three minutes into injury time.
With at least four minutes of time added on having been called referee Mick Tarpey correctly played on as there had been a number of delays with red and black cards being issued as the tensions rose. This allowed Portarlington mount one last attack and Ryan kept his cool to slot over the equaliser.
Both sides set out their stall early on playing flowing, open football, getting the ball into the forwards as quickly as possible. Colin Slevin’s neat outside of the left boot effort opened the scoring in the fourth minute. There quickly followed points from Colm Murphy and Jake Foster to hand the early advantage to Portarlington.
Padraig McMahon opened Ballyroan’s account in the ninth minute but that was swiftly cancelled put by Jason Moore.
Suddenly in the blink of an eye the sides were level. MJ Tierney’s shot for a point from a distance fell short of the target but Portarlington goalkeeper Scott Osborne misjudged the flight of the ball as it slipped under the bar.
It was not to be Osbourne’s night as he later had to be aided off the pitch after a heavy collision with team mate just on the pip of half time.
Foster’s point had Portarlington back in front but soon Ballyroan held the upper hand thanks to points from Tierney (free), Diarmuid Whelan and McMahon.
The last action of the half saw Foster end a sweeping end to end move that resulted in Ballyroan’s lead being reduced to the minimum, 1-4 to 0-6, at half time.
Slevin levelled affairs straight from the throw-in and Portarlington had substitute keeper Jack Whelan to thanks when he did well to deny Marty Scully a goal.
But there was no holding Ballyroan at this stage as they dominated, adding points through Tierney (45), Ciaran Carroll and Diarmuid Whelan (free).
But just as quickly lost control as Portarlington, led by Paddy O’Sullivan and Jason Moore, upped the pace and the ante. Two points from O’Sullivan in the 37th minute got them right back into the game with Colm Murphy landing the equaliser a minute later.
There was no stopping the men in maroon now with points quickly added from Foster (2) and O’Sullivan to give them a three point advantage in the 48th minute.
Ballyroan were convinced they had levelled the game once again after Cathal Doyle got his hand to a Diarmuid Whelan delivery and the ball was directed goalward. Neither umpire moved put the Ballyroan players erupted as the ball was cleared but no green flag raised. The referee consulted with his umpires and that was how it remained.
Another Murphy put four between them and this was how it remained in the 54th minute after Whelan and Murphy had swapped frees, and no one foresaw the drama that was to follow.
In between those two points we had Portarlington reduced to 14 men, Robbie Pigott dismissed after picking up his second yellow card.
Just four days after getting the better of Emo in a round one replay Ballyroan were not going to give up with a battle. Points from Tierney and substitute John Rodgers reduced the gap with just over the 60 minutes played.
Then in a dramatic twist Ballyroan retook the lead. With three of the four minutes of injury time played Diarmuid Whelan unleashed a shot that Jack Whelan did exceptionally well to block but the ball fell to McMahon who was left with a simple tap to the net.
Now Ballyroan looked to have secured a quarter-final place but there was more drama. With the tension rising Ballyroan picked up two black cards, Aaron Carroll and Tierney who also saw red having already been booked.
All this added to the time to be played and allowed Portarlington mount that one last desperate attack that ended with Ryan landing the equaliser.