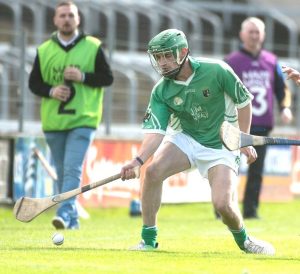 Gareth Dunphy scored a cracking goal for Ballyfin in their defeat of St Finatn’s Mountrath on Friday Photo: Denis Byrne

BALLYFIN moved a step closer to regaining their senior status which they lost last year when relegated. With wins over Mountrath and Clonaslee/St Manman’s they are now in the driving seat for a semi-final place.
On Friday evening in Trumera it was not all plain sailing against a determined Mountrath outfit. They were made battle all to way and had only three points to spare at the final whistle.
A strong cross field wind made life hard for both teams in the first half meaning that the scoring rate was slow to start with. There was six minutes on the clock before Ballyfin’s Eanna Lyons recorded the games opening score.
Mountrath hit back with a free from James Hyland and three minutes later Dylan Russell found the back of the Ballyfin net after their defence was slow to clear the danger.
Ballyfin really should have made a bigger impression on the scoreboard by this stage but they were guilty of some wayward shooting both from frees and from play. Gareth Dunphy got Ballyfin back into the game when he pointed from out near the sideline.
Eanna Lyons and James Hyland swapped frees before Ballyfin went back in front after Eamonn Duff struck for goal. Again it was a defensive error, this time by Mountrath that allowed Duff fire it to the net from 20 metres and after 20 minutes Ballyfin led 1-4 to 1-3.
Ballyfin built on this momentum with Darragh Connolly pointing from a narrow angle with Lyons adding two converted frees. Connolly pushed Ballyfin further ahead he took a pass from James Finn to point. He followed up with another a minute later and James Hyland and Lyons exchanged frees the half time score saw Ballyfin lead 1-11 to 1-6.
The second was similar to the first with scores hard to come by with both defences on top, particularly the Ballyfin rearguard which didn’t give an inch to the Mountrath attack.
Lyons extended Ballyfin’s lead with another free only to have it cancelled out by Hyland. Gearoid Williams narrowed the gap with a well taken point but Ballyfin responded with two scores as David Connolly and Eamonn Duff split the posts to see their side open up a five point gap entering the final quarter.
Mountrath’s task became neigh impossible when they were reduced to 14 men with ten minutes remaining. But they did not lie down and hit back forcibly with points from Hyland (free) and Gearoid Williams and Gavin Sydes from play to close the gap to the minimum.
Now it was Ballyfin’s time to show their mettle and they did. They finished strongly with James Finn and Kevin O’Rourke landing a brace of critical points to secure a very important victory.
With bottom of the table St Fintan’s Colt to come the winners are in prime position to advance to the semi-final.