Triple for Purcell as Rathdowney/Errill cruise into the semis 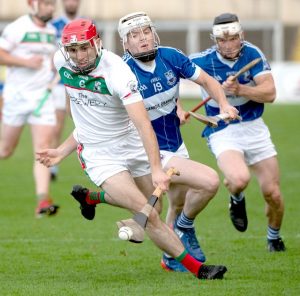 WHEN these two sides met 12 months ago 26 points separated the teams at full back. This year after Rathdowney/Errill easily saw off Ballinakill in the opening round, they entered this game as warm favourites. And, after Portlaoise were well beaten in the opening game of Saturday’s triple header, a win for last year’s beaten finalists almost guaranteed them a semi-final place.
In their opening round Castletown had been impressive seeing off Portlaoise but they realised this would be a big step up. That was how it turned out.
Castletown had assistance of the Slieve Bloom players last year but were on their own in this year’s competition and still they began very well. Dylan Conroy converted a free followed by an excellent point from play by Aaron Gaughan.
Rathdowney/Errill were feeling their way into the game but hit two wides on their first attacks but with the next three strikes they scored a goal and two points. Mark Kavanagh raised the two white flags before Ross King and Pat Purcell combined for the latter to raise the first green flag and only eight minutes on the clock.
Castletown replied with two points by Conor and Martin Phelan but Brandon McGinley and Tadgh Dowling did likewise at the other end. Rathdowney/Errill then hit another purple patch. Mark Kavanagh fired over a brace of points before Pat McCane soloed his way past two defenders and let fly into the net from 20 metres.
Dylan Conroy and Gearoid Gaughan put two points on the board for Castletown after 28 minutes but at the interval Rathdowney/Errill led 2-7 to 0-7. Castletown were still hanging in but never threatened the Rathdowney/Errill goal.
On the resumption Gearoid Gaughan converted an early free but two minutes into the new half great combination work between county colleagues Ross King and Pat Purcell resulted in a second goal for the Laois captain. Mark Kavanagh and Gearoid Gaughan shared the next four points but Kavanagh then added the next two to put the game out of sight for Castletown despite Dylan Conroy breaking the sequence of Rathdowney/Errill scores with a converted free.
Ten minutes remained when Pat Purcell raced down field and slammed home his third goal and added a point for good measure. In the remaining minutes Tadgh Dowling sent over a point as did Jack Kelly while Mark Kavanagh brought his tally to 11 one more than Pat Purcell.
However, the game ended on a sour note for Kavanagh because after another scoring exhibition he got involved in a minor skirmish and when the dust settled the referee issued him with a red card. Had the game been closer this incident might not have occurred but Rathdowney/Errill were so far ahead interest had faded and supporters could not wait for the final whistle and some of the players shared their feelings.
Rathdowney/Errill, without having to play to their potential, are an hour away from another final but Castletown are still in contention regardless of how they fare against Ballinakill next time out.
Portlaoise who were looking on can hardly be looking forward to their meeting with the men from the banks of the Erkina in a few weeks.