Colt re-Joyce with a late flurry to secure first victory 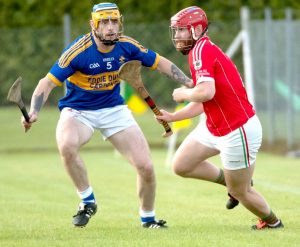 THE beaten finalists of five years ago, Clonaslee are heading for relegation a scrap with their neighbours Slieve Bloom. Having suffered defeat to Ballyfin in the opening round they headed for Ratheniska on Friday evening facing Colt who themselves stumbled in their opening round joust with Mountrath.
They were determined to get back on track after suffering a heavy defeat in last year’s quarter-final and it was Colt who finished in style but Clonaslee/St Manman’s had suffered a number of injuries before half time.
Ciaran Hyland opened the scoring from a close in free but Chris Murray equalised only for Ciaran Hyland to regain the lead after seven minutes. Wides were the order of the day at both ends but Chris Murray equalised while Sean Callaghan edged his side back in front.
Ten minutes into the contest Brian McDermott got in the way of a great ball heading wide but he managed to retrieve it and beat the keeper from close range. Chris Murray increased the Colt advantage but Clonaslee hit back with a good goal from Diarmuid Conroy who was unfortunately forced to retire with an injury.
Clonaslee fought back and points by Liam Senior kept them in sight but Colt with points by Murray and James Keyes pulled away only for Liam Senior to add a second goal just before the interval leaving the sides all square 2-5 to 1-8.
The second half saw Cian Moffit and James Keyes add two early points but whatever way the wind was blowing Colt hit three wides in quick succession before Chris Murray added a brace in as many minutes. Now the deficit for Clonaslee was four points with 18 minutes remaining and they lost score getter supreme John Rowney to injury.
Chris Murray and Glen McEvoy exchanged points and another by Willie Murray score gave Clonaslee hope. Five minutes from time Colt struck a killer blow when Eoin Joyce finished a good pass from Cian Moffit to the net and he completed the rout when he swung at a ball that was heading wide and the net shook for the fifth time.
Chris Murray completed a good day’s work adding his sixth point ensuring his side can still be title contenders. Clonaslee now face Mountrath and the losers here will be in trouble. Next up for Colt is a clash with table toppers Ballyfin.