Facile victory for The Harps over weakened Slieve Bloo 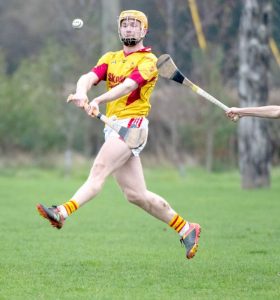 The Harps sit on top of their group having comfortably seen off the Slieve Bloom challenge for their second win. The Durrow side will have learned little from Saturday’s game as the losers had little to offer in the way of a serious challenge.
However, victory came at a cost. The Harps were reduced to 14 men when referee Adrian McCarthy handed corner back Shane Phelan to a red card. There was further controversy when their manager Fintan Deegan was also ordered from the field for rebuking the referee in the aftermath of Phelan’s sending off.
And it wasn’t just The Harps who did not have 15 on the field at the final whistle. Slieve Bloom now face a very difficult battle to stay in the Senior ‘A’ after corner-forward Tadgh Cuddy and goalkeeper Damien Campion were also sent off.
Slieve Bloom were not to score from play over the course of the game and it was down to Ciaran Conroy to account for all their scores from frees, a statistic that does not bode well for the future.
It was all too easy for The Harps. They scored at will, picking off points at ease and probably should have had a greater total by the end of the game.
The Harps quickly ran into an early lead with Padraig Delaney pointing twice in the opening minutes. Michael Lanigan rattled off three in a row.
Slieve Bloom were getting chances, from both play and from frees, but they just couldn’t hit the target which might have been accounted for particularly due to the strong diagonal wind.
Lanigan, Delaney and Eoin Clancy all found added for The Harps as they lead by ten points with a little over 20 minutes played before Slieve Bloom finally opened their account with a Ciaran Conroy free in the 24th minute.
The Harps hit back with points from Ciaran Comerford (2) and Lanigan (free) while another Ciaran Conroy free ended the first half scoring as The Harps led 0-13 to 0-2 at the break.
Two Conroy frees gave Slieve Bloom a good start to the second half but that was as good as it got, and it soon got worse when an altercation saw Shane Phelan and Tadgh Cuddy red carded.
Michael Lanigan and Ciaran Conroy swapped frees but it was all too easy for The Harps. Slieve Bloom kept battling away but made little or no impact on the scoreboard.
And to make a miserable evening even worse for Slieve Bloom goalkeeper Damien Campion was dismissed when he appeared to swing at a Harps player while taking a free.
Slieve Bloom now face Rosenallis in the next round while The Harps take on Shanahoe.