LAOIS teenager Trisha Anand aims to become the first Irish female to be crowned Woman International Master in chess when she competes at the Northumbria Masters in England this weekend.

This is the second-highest women’s individual ranking title that can be bestowed from the Fédération Internationale des Échecs (FIDE), the international governing body of chess.

Trisha (13) is the highest-ranked female player in the country. She recently won the under-14 Individual European Chess Championship. 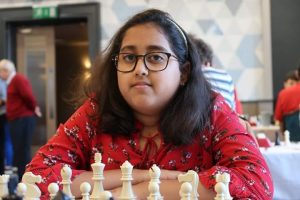 “We are very proud of her and we hope she can make history in Newcasle this weekend,” said her dad Daya.

Her brother Tarun is also a talented chess player and is ranked number-one in the country at U16 level. He was recently crowned blitz champion at the Irish championships and won a silver medal while representing Ireland at the World Schools Chess Championships. They both have their sights set on becoming chess grandmasters.