High Nellies will be out in force for annual Bulfin Cycle

The two-day spin begins in Durrow before moving to Aghaboe Abbey via the historic De Vesci Estate in Abbeyleix and onto St Fintan’s Church at Cremogue.

Day two sees the cyclists make their way to Kilkenny, where they will traverse the Medieval Mile before returning by bus to Durrow for the final events. 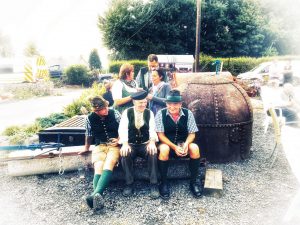 The rally also offers participants the option to travel on a double-decker heritage bus if they can’t or don’t want to cycle so they won’t miss out on the chance to explore the landscape.

The event is held in memory of William Bulfin. On his return to Ireland in 1902, having worked in Argentina for several years, he bought a bicycle and set off on a 3,000-mile road trip, taking in the highways and byways of all four provinces.

Durrow Vintage Legend Cycle Club member Hugh Shepherd said: “In previous years, we plotted the route of the cycle to actually follow sections of Bulfin’s journey, according to his book. In 2018, we deviated from this plan by confining our travels to Co Laois which, of course, Bulfin did travel through, but our route was mapped out to incorporate visits to important heritage sites along the way. We will explore the medieval past of both counties and the connection that existed between them in that era.”