THE standard of results was high at St Mary’s CBS, Portlaoise, with two students exceeding 600 points, six attaining more than 550 and 12 getting over 500 points.

School principal Maura Murphy said that 130 students sat the exam. The best results were achieved in science and practical subjects, with many in those classes getting H1s and H2s. She also noted that those who took transition year did best. 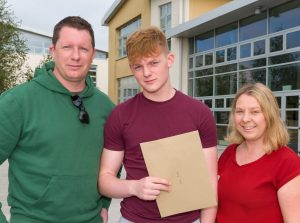 “We’re delighted with the results. We had 80 students who did transition year and it was those students who did best and had the most thought-out plans as to what courses they wanted to do. We were really impressed by how thought-through their plans were this morning.

“There’s a wide variety of choices, with some students going abroad. We have one going to Canada and another one to the Netherlands. They’re very pleased overall and we wish them well. They’ve been a lovely class, they’ve provided us with five or six years of work and entertainment. Thanks also to the parents for all their support.”