Clough/Ballacolla advance to another semi final 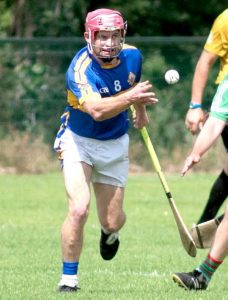 Clough/Ballacolla’s Shane Hanlon scored a goal inside the first minute against Rathdoney/Errill in the IHC q/f                     Photo: Denis Byrne

THESE two clubs have provided some great battles over 13 years and on Monday week last, after both their senior teams made big advances in the championship, these two sides were anxious to maintain the momentum when they met at O’Keefe Park. In their third meeting of the year and on a perfect evening they wrote another chapter in the battle of the Erkina neighbours.
Rathdowney/Errill were many pundits’ favourites to advance. The two teams included players with senior experience and the game was less than a minute old when two of Ballacolla’s most experienced Brendan McEvoy and Shane Hanlon combined for the latter to blast to the net.
Thep Fitzpatrick would open the Rathdowney/Errill account with another senior player Jim Doyle pointing for Clough/Ballacolla after five minutes.
If Shane Hanlon scored a good goal well the second goal of the game was of real class after six minutes and from one of the most decorated hurlers between both clubs. Enda Meagher caught a ball 20 metres out and his rasping shot shook the net behind Cathal Dunne.
After that most scores from Damien Bergin and Thep Fitzpatrick, Rathdowney/Errill almost had a second goal but a great shot from Shane Madden was dealt with by Cathal Dunne.
Chris Rafter and Eoin Burke traded points before the first turning point of the game came after 20 minutes. Chris Rafter soloed down field unchallenged. His shot seemed destined for a point but it dipped and the keeper made a block but the ball spun away and into the net.
That was to be the last green flag of the game and, apart from the free takers, great points were registered by Jim Doyle, David Poynton and just before the interval a fine effort by Shane Madden followed by a Thep Fitzpatrick free left the league champions in front 1-11 to 2-5.
The second half did not seem to have the same intensity with Clough/Ballacolla dictating most of the play. After Damien Bergin converted two frees and Aiden Doyle had opened the scoring the teams were level six minutes into the new half.
Clough/Ballacolla regained the lead after 41 minutes with a well struck point by Ciaran Finane and would never again be headed.
Then game’s real turning point came when Rathdowney/Errill were awarded a penalty. Their leading scorer, Thep Fitzpatrick stood over the ball but to the consternation of his legion of admirers his shot spun away and keeper Cathal Dunne had little difficulty in clearing his lines.
After that Rathdowney/Errill introduced Jordan Kavanagh first to try and loosen their attack then Shane Bowe but to no avail. John Paul Ryan made a brilliant save from Chris Rafter to keep his side in touch entering the closing quarter.
Damien Bergin edged his side two clear and with seven minutes remaining he put three between the sides. At the other end Shane Madden saw a great effort tail off wide. Bergin added another point and Rathdowney/Errill had not scored since Thep closed the first half scoring.
Now he stood over a free with two minutes remaining. He made no mistake from 80 metres. As his side forced two more frees he brought his tally to ten but two minutes into injury time the final whistle sounded and despite his great efforts Thep ended up on the losing side.