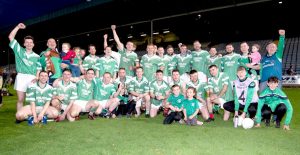 THE exploits of Paddy Purcell on hurling fields not just in Laois but across the country are well documented. But what many do not know is he is a dab hand with the big ball also and it showed during Errill’s junior ‘B’ football title c,aiming final in O’Moore park on Thursday.
It might be a tad unfair to his Errill team mates to suggest he was the difference between the two sides but he was the one who stood out as that bit ahead on others on the evening. Not only did he score a goal and four points but he also played a hand in many of his side’s other scores.
Given the location of these two two clubs many would have seen Mountmellick as favourites going into the final and while they were still very much in contention at half time they faded badly in the second period.
In fairness Mountmellick’s plans were hampered as early as the fourth minute when full forward Aidan Challoner had to be replaced by Tomás Bambrick having picked up an injury.
A sixth minute Purcell free was cancelled out by Colm McEvoy. Minutes later a sweeping move saw John Purcell place Patrick Wright who calmly slipped the ball under the keeper.
Eoin Burke and Jordan Williamson swapped two excellent points before Paddy Purcell’s second free opened up a five point gap in the 16th minute.
That was to dramatically change a minute later. Mountmellick were awarded a penalty when Jack Kelly pulled down Robbie Hibbitts as he bore down on goal. Darragh Hanlon took on the responsibility but his shot was saved by Brian Meehan, However, Hanlon’s blushes were spared when he reacted quickest and poked the rebound to the net. 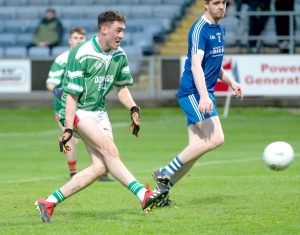 A poor kick out then fell to Conor Comiskey and suddenly the gap was back to the minimum. David Poynton eased the pressure on Errill but by the 28th minute the sides were level after Williamson and Robbie Hibbitts raised white flags.
But there was still time for first half action. When Patrick Wright’s effort came back off the upright Vinny Cleere gathered it, lost it but still managed to scoop the ball over the line. And with Poynton tacking on a point Errill went into the break with a four-point lead, 2-6 to 1-5.
Now it was time for Mountmellick to show their mettle and it looked like they were ready to make a game of it when Robbie Hibbitts pointed two minutes into the new half. However the fight back never materialised and astonishingly that was to be Mountmellick’s only score of the second half.
Paddy Purcell converted another two frees before pouncing for his second and Errill’s third goal in the 42nd minute.
That goal definitely killed off this game as a contest. Both sides were now going through the motions and play was severely disrupted as both managements introduced a raft of substitutes.
Just four points were scored over the final quarter, Tadgh Dowling, John Purcell, Matt Meehan (2) the ones to raise the white flags.
I’m sure there were celebrations up in Errill on Thursday night but a few of the players, such as Paddy and John Purcell, Jimmy Corrigan, Jack Kelly and Tadgh Dowling, will be hoping that this was just the first county medal they will be picking up this year.