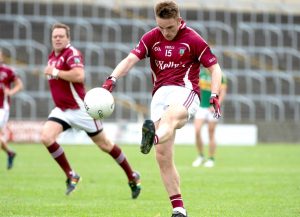 Ross Munnelly came to Arles Kilcruise’s rescue with another super performance against Crettyard in the SFC relegation semi-final in O’Moore Park on Saturday     Photo: Denis Byrne

FOR the second time in three years Arles Kilcruise have survived a relegation threat. Last time they beat Mountmellick in the final but this time it was their neighbours from Crettyard who provided the opposition.
The champions of 16 years ago had suffered defeat against Courtwood and then Ballylinan saw them off at second attempt. Crettyard suffered heavily at the hands of Arles Killeen and Ballyfin which meant a winner takes all in glorious conditions.
Ross Munnelly, a survivor from their only title winning team, posted early points and would go on to play a major part in ensuring senior football next year for the maroon clad side. Evin O’Carroll kept Crettyard in touch with some exquisite points.
David Conway soon found the target and very little separated the sides but the experience of Kilcruise in a close game began to tell. When that man Munnelly struck for a goal after 20 minutes the lights were flashing for the Coalminers but they did not panic.
Kilcruise extended their advantage with David and Chris Conway finding space in front of goal. Evin O’Carroll and Cormac Murphy replying at the other end. In the closing minutes of the half Caomhan Brennan and Mark Lyons traded points and at the interval Crettyard trailed 0-7 to 1-10.
Crettyard were not resigned to giving up and they produced their best football in the third quarter and after Kilcruise lost two defenders, Sean Meaney and Paudge Conway, through injury Crettyard might have expected this weakened the Arles men but anyone who dons that jersey knows what is expected. Jason McLoughlin and Kevin O’Neill had come on midway through the opening half and they were excellent.
Evin O’Carroll was the standout performer for the ‘Yard men and, although closely marshalled, he struck a great goal after 39 minutes despite being surrounded. Kilcruise looked a little worried when a great Crettyard move involving the evergreen Cristoir Maher lobbed the ball in the direction of O’Carroll who struck with venom and the ball nestled in the net. The scoreboard showed that Crettyard had shaved seven points off the deficit and ten minutes remained.
But the old head of Chris Conway earned his side a valuable point ensuring two points was the difference with five minutes remaining. Crettyard tried to clear their lines but were penalised in their own square and to their consternation a penalty was awarded to Kilcruise. Ross Munnelly held his nerve and scored his second goal to the relief of Arles Kilcruise.
Kilcruise introduced two late subs and in one last effort Evin O’Carroll brought his total to 2-7 but he was still on the losing side. Crettyard now face The Heath in a relegation scrap and they will not give up until it’s over in three week’s time.